As you get old, Don’t know how to react: Dravid 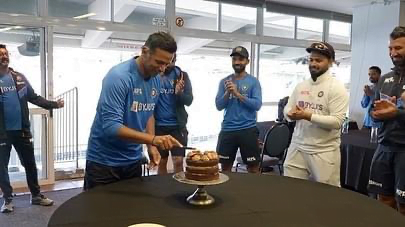 Former Indian captain and current head coach Rahul dravid who turned 49 on Tuesday, joked that he is unsure of how to react on his birthday as he is turning old.

Dravid who is currently in South Africa as a part of his national duty celebrated his birthday along with Indian team players. After taking up the role as chief coach of Team India this is the first overseas tour.

Third and final test of the series decider began on Tuesday after loosing the toss hosts have dominated the days play.

South Africa is the only test playing nation where Team India is yet to win a Test Series. Series decider underway in CapeTown is not a happy hunting ground for Team India, as they have not managed to win a test match at this venue in the past.