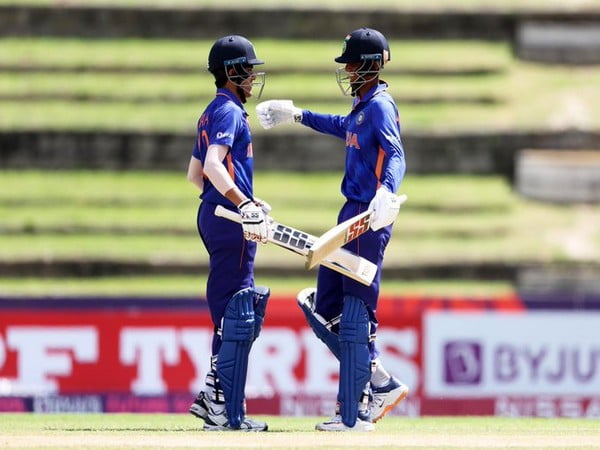 Playing the last match of the league stage team India has registered a thumping victory by defeating Uganda by 326 runs. India was already through to the Quarter-Finals with wins in the first two league matches.

Losing the Toss, India was asked to bat first. 40 run stand for the first wicket had come to an end when Harnoor Singh was caught by Brian Asaba in the bowling of Kidega, Skipper Nishant Sindhu joined Angkrish Raghuvanshi in the middle and the duo had put on 45 runs for the second wicket, at 85 runs on the board Indian skipper was sent back by Medium pacer Pascal Murungi who went on to pick 3 wickets in the match.

With 85 runs on the board in the 16 over Raj Bawa and Raghuvanshi played attacking cricket and took on the Uganda bowlers. The duo went on to build a double century stand for the 3 wicket. Bawa remained unbeaten on 162, Raghuvanshi missed out his 150 by six runs as the opener got out in the bowling of Yunusu Sowobi. India went on to post a mammoth target of 406 runs for victory.

Chasing 406, Uganda started struggling from ball one, Isaac who was hit on the glove of the first ball of the innings eventually retired hurt after facing 5 delivers with the score of 5 on the board, which came in the form of wides. Hangaragekar sent Cyrus Kakuru back for a golden duck.

Skipper Pascal Murungi got support and Ronald Opio 29 run stand for wicket took the associate nation close to the 50 run mark. Opio was sent back for 11, Murungi kept losing partners with no significant contribution. Opio got out in the twenty over with Uganda’s score of 77/8, eventually bowled out in the twenty over with 79 runs on the board. Murungi 34, and Opio are the only two batters to reach double-figure, with 19 Extras second-best run contributor in Uganda’s score.

For IndiaNishant Sindhu bagged 4 wickets, Hangargekar got two to his name, and Vasu Vats and Vicky Ostwal picked a wicket each.

India’s quarter-final match is scheduled for the 29 of January when India will take on Bangladesh.