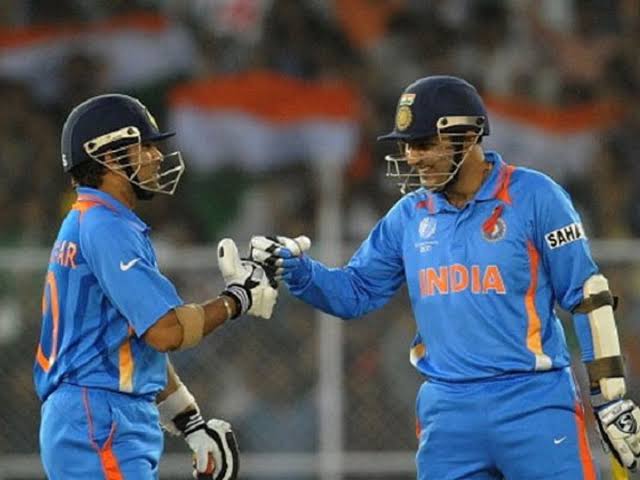 Team India won the world cup after 28 years in 2011. The memory remains inscribed of all the Indian cricket fans. 2007 world cup finalist Sri Lanka scored 274 with the help of Mahela Jayawardene’s magnificent century. In reply, Gautam Gambhir (97) and Mahendra Singh Dhoni’s (91) incredible performance guided India to lift World Cup for the second time at Wankhede Stadium, 2nd April.Team India’s world cup winning member Virender Sehwag shared an unheard story on Cricbuzz. He and Sachin Tendulkar both were discussing on the surface of the pitch.

“I’ll tell you a story about the 2011 World Cup final. Sachin Tendulkar was standing at midwicket, and I was standing at deep square leg. As the sun was setting, we noticed a lot of shine on the wicket. Both of us looked at it, and then looked at each other and signalled that it will be fun to bat on this wicket. Neither of us scored runs,” Sehwag said on Cricbuzz.

Former Indian explosive opener revealed this when panel expert were discussing about the rough phase of a batsman, specially on Virat Kohli’s form.

“So all the discussions that there’s heat, the wicket is flat, you win the toss and choose to bat… if you are in that pitch where you can’t score runs, you won’t score runs. It’s as simple as that,” Sehwag further added.

Virender Sehwag didn’t open his account in that high voltage match. He was dismissed by Lasith Malinga on the 2nd ball of the 1st over of Indian innings. His opening partner Sachin Tendulkar started very well and smashed two boundaries including his trademark straight drive against Lankan pacer Nuwan Kulasekara. But unfortunately he got out on Malinga’s ball. Master Blaster played an outstanding innings in the semi-final against Pakistan and was awarded Man Of The Match.