Virat was super excited and was seen celebrating the wicket of MS Dhoni in the 19th over while CSK was chasing for 173. 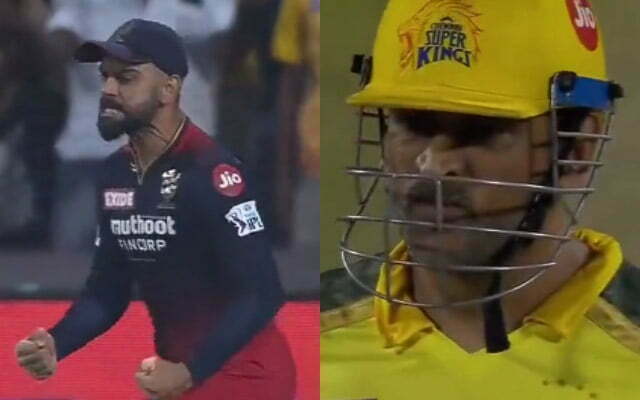 A controversy aroused after the match between CSK and RCB due to Virat Kohli celebrating skipper MS Dhoni’s dismissal. On May 4, the match was between CSK and RCB held at the MCA Stadium in Pune in IPL 2022. This match was really important for both Chennai Super Kings and Royal Challengers Bangalore to keep up their chances to stay in the playoff race.

RCB batted first and started off with a good performance. Then there was a downfall of runs with middle-order but hopefully, Dinesh Karthik finished giving a decent total of 173. While CSK chased a total of 173 runs, the opening partnership of Ruturaj Gaikwad and Devon Convey started well by continuing their previous match form with 54 runs. CSK was really looking good in the mid-innings, where they scored 77 for 3 wickets. With seven wickets in hand, the match looked like CSKs’ until Harshal Patel started his spell.

At the end of 18 overs, CSK scored a total of 135 runs for 6 wickets. And MS Dhoni came on grease. As usual, the expectation rose with Dhoni on the field. Dhoni has already finished a few games for Chennai this season and it was 39 runs required from 12 balls and Dhoni’s fans were in delight. In the nineteenth over while Dhoni was trying to hit six from Hazelwood’s short ball but ended in the hands of Rajat Patidar.

As soon as Rajat took the catch, Virat Kohli was excited and celebrated Dhoni’s dismissal which was caught on camera. This video went viral all over social media and Dhoni fans expressed their anger.

IPL 2022: Virender Sehwag opined CSK wouldn’t have lost so many matches in MS Dhoni’s captaincy
Pollard admitted that he hasn’t been able to finish the games : Jayawardene