Watch : Ben Stokes smashed 34 runs in an over and hit 64 ball century in country championship 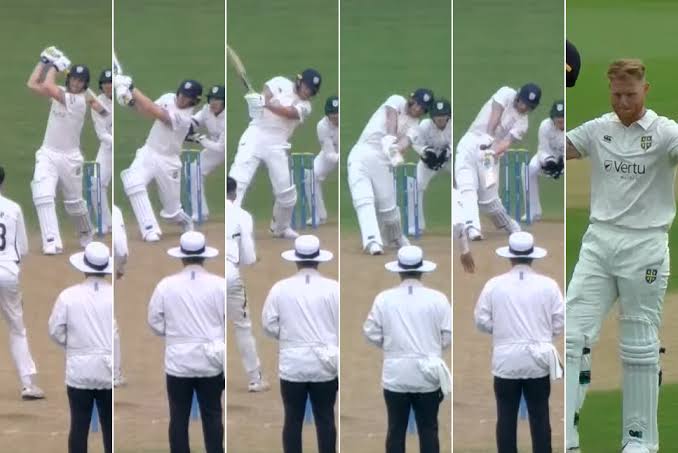 England newly appointed test captain Ben Stokes announced his comeback in own style. In a country championship match , Durham all-rounder smoked 64 ball century against Worcestershire. He blown away Jash Baker for 34 runs in an over. English captain smashed him all over the ground with consecutive 5 sixes and then hit a boundary.

This incident happened in the 117th over of Durham’s innigs, when team’s score 464/4. Then Stokes was batting on 70 with David Bendigham. Worcestershire left arm orthodox spinner Jash Baker came into ball and Stokes smashed it over bowler head for a six. Again he thrashed him over deep midwicket on the very next ball. He demolished the third delivery over long off and in the fourth ball he sent back on the bowler head for a huge six. 2019 World Cup hero smashed the fifth ball over log on and then it seemed as he would manage to Yuvraj’s six sixes record. But unfortunately he played rocket shot along the ground for a boundary of the last ball of Baker’s over.
Ben Stokes played a blistering knock of 161 runs from 88 balls including record 17 sixes. Durham declared the innigs on 580.

Watch : Ben Stokes hits 34 runs in an over

Meanwhile Ben Stokes will lead full time red ball captaincy for England as Joe Root stepped down from his post.

See also  Watch: Quinton de Kock walks back to the pavilion after umpire turns down the appeal

Stokes in his interview with BBC said: “I want to win games of cricket for England. The best way to do that is picking your best XI and in my opinion if Stuart Broad and James Anderson are fit they are available for selection”

IPL 2022 – MI vs GT: “9 Runs off 6 Balls made me feel I have nothing to lose” – Daniel Sams | Watch
Former Chief Selector MSK Prasad wants Virat Kohli to take ‘Significant Break’