Nick Knight opened up about the match and recalled how an “extraordinary partnership” Yuvraj and Kaif won the final for India at the Lord’s. 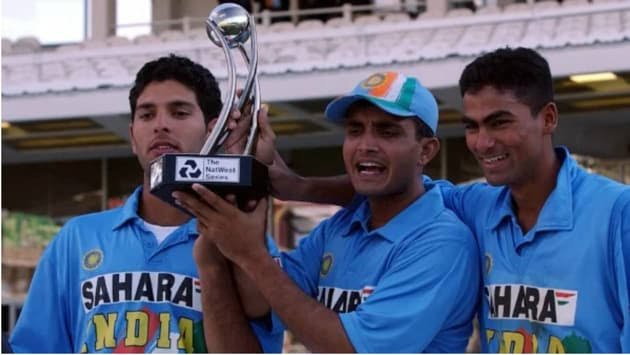 The famous NatWest series finale of 2002 is one of the memorable triumphs over the past two decades. It remains one of India’s biggest wins in a limited-overs game. No one can forget Sourav Ganguly’s celebration by removing his T-shirt and swirling it in the air at the Lord’s balcony. Former England cricketer Nick Knight opened up about the match and recalled how an “extraordinary partnership” Yuvraj Singh and Mohammad Kaif won the final for India at the Lord’s.

England opted to bat first. Marcus Trescothick and Nick Knight came out to open the innings. Both the English batsmen started the innings steadily. In the 8th over, Indian top spinner Anil Kumble picked up Knight for 14runs leaving a total score of 42. Then comes the England captain Nasser Hussain to the crease. Centuries from Trescothick(109) and Nasser Hussain (115) and 40 runs from Andrew Flintoff, England posted a huge score of 325/5.

“The game back then was not played the same way it is done now. So 325…I can tell you that when we were back in the dressing room and having some of the best foods we were pretty happy with ourselves. I knew we were playing against a good side with extremely good players but in those days if you got 325, you are the strong, strong favorites,” Nick Knight said.

In reply, Indian openers Virender Sehwag and Captain Sourav Ganguly gave a century-opening partnership. Both the openers were dismissed in the consecutive overs. Indian middle-order batsmen failed to continue the good platform given by the openers. In the 24th over India was 146/5. All four pillars Virender Sehwag, Sourav Ganguly, Sachin Tendulkar, and Rahul Dravid were back in the pavilion sweeping away the hopes of winning. While the whole cricket World felt the gate is closed for India’s series win, young legs, Yuvraj Singh and Mohammad Kaif walked in. Both played one of the best innings of their life, which remembered till now. Both Yuvraj Singh(69) and Mohammad Kaif(87 not out) scored half-centuries and took India to a historical series win with three balls to spare in Lord’s.

“Then Ganguly and Sehwag came out and smashed the first few overs I got to think then, probably after 10 overs that this might be quite a close game here because Dravid, Tendulkar was yet to come. And we really didn’t know much about Yuvraj and Kaif. We knew they were good and talented players but I didn’t really, if I’m really being honest here, that at 140 for 5 when Sachin got out did I think that these two guys whom we didn’t know much about can get the team up to 326. It’s not being arrogant or being stupid, it’s just the way you think at that point,” he said.

“When the partnership began to unfold you started thinking that these are really good players. Yuvraj was just smashing it leg side and over long-on. But what Kaif did affect me a little bit, was a deep point because a fielder there think he just got to stop the boundary but what he was so good at was hitting the half-length balls and makes you think that you got to come in and stop those twos and threes. They ran us ragging”, said the former England cricketer.

“When Sachin got out, the entire England crowd, the team, and part of the Indian dressing room were thinking that it’s a long way for India to win this game so for those two guys to do what they did was extraordinary.”

“That partnership was filled with ones, twos, and threes. It was one of the best partnerships that I can remember playing the game”.

India ended up reaching 326 for eight in 49.3 overs, winning by two wickets.