Despite a 52-run loss against KKR, MI pacer Jasprit Bumrah impressed everyone at the venue with his fast-bowling magical spell. 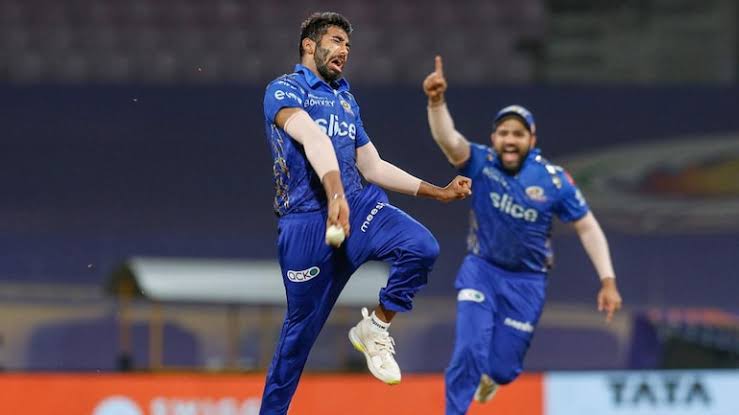 Mumbai Indians suffered a lot in this current IPL season 2022. MI won only 2 matches so far showing off with overall poor performance. The match between Mumbai Indians and Kolkata Knight Riders was held at the DY Patil Sports Academy on Monday, May 9. Despite the 52-run loss against KKR, MI pacer Bumrah impressed everyone at the venue with his fast-bowling magical spell. Jasprit Bumrah came back stronger in this match as he had taken only 5 wickets in all 10 matches played previously.

Jasprit Bumrah bowled one over with five runs in his first spell. And his second in the 15th over where he took out Nitish Rana (43) and Andre Russell (9). In his 3rd spell, which was the 18th over Bumrah took 3 wickets, which include Pat Cummins and Sunil Narine for ducks, a maiden, without conceding a run, and Sheldon Jackson (5) as well.

MI’s hope on Bumrah was repaid as he finished with a total of 5 wickets for just 10 runs in 4 overs, sweeping away main batsmen and restricting KKR to score 165 for nine

Even though MI lost their game against KKR Bumrah was awarded the man of the match.

Following his magical spell in his T20 career, wife Sanjana Ganesan from the venue cheered with kudos for Mumbai. She came up with a tweet summing up the emotions hailing Bumrah. Also posted a picture of her on Instagram, showing 5 fingers manifesting her husband Bumrah’s 5 wickets haul.

Although Bumrah helped MI with 5 wicket haul, in revenge KKR’s game-changer Pat Cummins picked up three crucial wickets in one over restricting MI’s middle-order batsman. Thus MI couldn’t manage with the chase and lost against KKR by 52-runs.

Jasprit Bumrah in the post-match presentation said, “It’s always a good feeling to contribute but the important thing is for the team to win. We had our chances but could not get it done. My aim has always been to stick to my processes and I like to contribute in whatever way I can,”. Bumah believes only in the best processes and accepting their outcomes.

“I always do my evaluation by myself, I look to follow my own processes and not pay attention to what the outside world is saying. I have been in great rhythm in this tournament. You cannot control the end result, you can only follow your processes best and I accept whatever results come up after,” Jasprit Bumrah said.

“You cannot judge anyone by stats or end results. There are a lot of factors involved – like the game state, onset of dew, the risks taken at different times – which come into play.”
Bumrah feels that their young team is getting better to perform in upcoming matches.

“We have not been able to close out games despite having opportunities. Ours is a young team, that is still getting better and trying to understand their game. We have always been competitive and are just looking for some complete performances. It will be our aim to get that ideal performance in the remaining games,” Bumrah concluded.

Mumbai Indians next will play against Chennai Super Kings on May 12th.