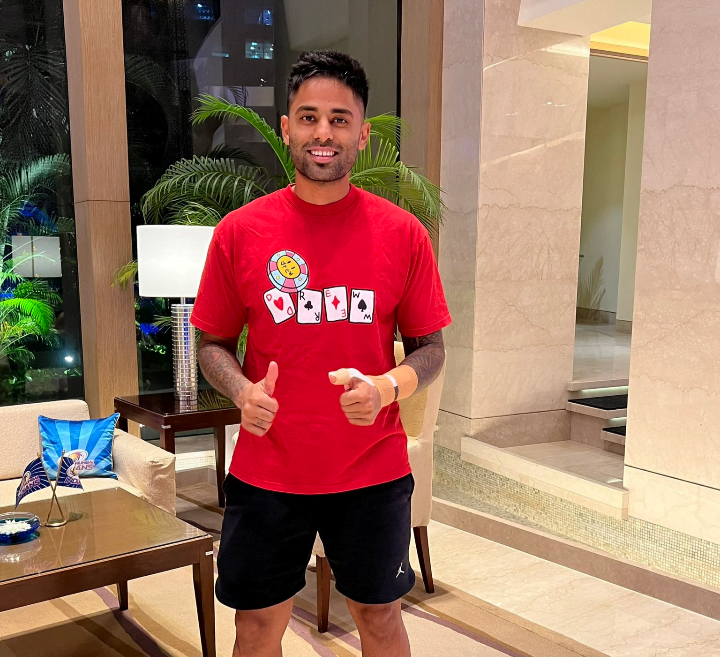 Mumbai Indians middle order batter Suryakumar Yadhav has been ruled out of remaining matches of IPL due to a left forearm muscle injury on Monday. He has scored 303 runs from 8 matches with an average off 43.29 including 3 fifties and is the second highest run getter of the franchise.

“Suryakumar Yadav has sustained a muscle strain on the left fore arm and has been ruled out for the season. He has been advised to rest, in consultation with the BCCI medical team,” Mumbai Indians said in a statement.

Suryakumar Yadhav is one of the retained players of the Mumbai Indians. In this edition MI has already been eliminated from the race of playoffs as the franchise lost first eight consecutive matches. Rohit Sharma led Mumbai Indians didn’t perform well in the ongoing IPL and as a result, they are at the bottom of the IPL points table. In their last match against KKR, five times IPL champion collapsed on 113 while chasing against KKR.

The 31 year old thanked fans for their good wishes and support. MI dependable batsman also said that he will be back in action very soon.
Meanwhile, Suryakumar Yadhav didn’t play first two games for the franchise as he was recovering from hairline fracture. MI Star batter sustained it while he was fielding during India vs Sri Lanka T20 series.

“With all your wishes and support, I will be back in no time,” Suryakumar Yadav said in a tweet on Monday.

“To my Mumbai Indians family, I will be cheering for you from the other side, this time. Let’s finish the tournament on a high note and display our true character on the field,” he wrote in the tweet.

See also  Rahul will emerge as a phenomenal leader: Goenka