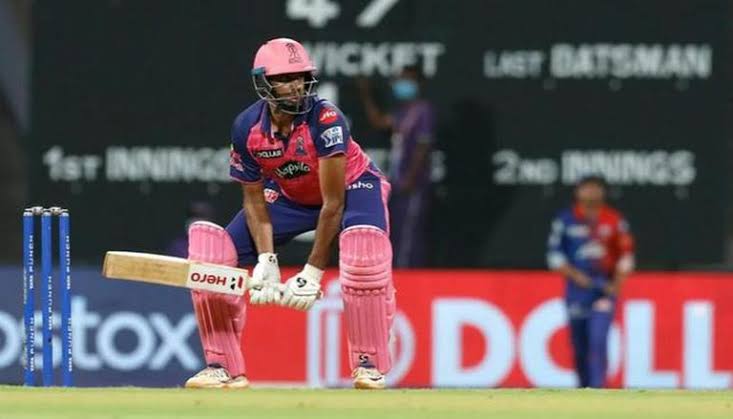 Rajasthan Royals off spinner Ravichandran Ashwin slammed his maiden IPL half ton against DC at DY Patil Stadium yesterday. He was promoted at no 3 and made 38 ball fifty including 4 fours and 2 sixes. Twitter went mad after seeing his blistering batting performance.

Talking about the match, batting first RR scored 160 with help of Ashwin and Padikkal’s brilliant innings. Chetan Sakariya, Nortje and Marsh, each of them took two wickets. RR skipper scored only 6 runs before he was dismissed by Nortje. In reply, DC all-rounder Mitchel Marsh’s majestic 89 and Warner’s unbeaten 52 helped to chase the total with 11 balls remaining.

Have worked a lot on my batting: Ravichandran Ashwin

Speaking about his new role, Ashwin said “No license has been given. From the starting of the season it was communicated to me properly that I will be used as a batter up the order. We had a few practice games where I opened also.

“Have worked a lot on my batting, so it’s nice to see whatever has been worked on translates into the field,” Indian off-spinner said during the post-match press conference.

“I was in good batting rhythm before the start of the season. Worked a little bit on my batting, like tried to transfer my body wait forward, made a little switch in my technique. Pretty good feel about the knock but it didn’t come in a winning cause.” He added.

However, RR is placed at third position with 14 points from 12 games and DC is at fifth with 12 point from same number of games.

IPL 2022: “How’s the Josh” – David Warner celebrating with his team after their basting victory against RR | Watch
IPL 2022: –”It might be coming to end… Jadeja at Chennai” Says Former England Cricketer