IPL 2022: MI vs CSK| DRS was unavailable even though with the presence of a generator – Harsha Bhogle explains

Harsha Bhogle, an Indian commentator clarified the doubts about DRS unavailability with the presence of a generator for LBW by Devon Conway 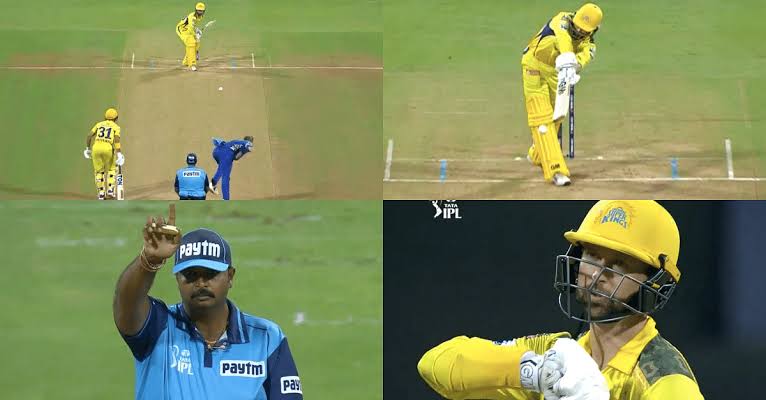 Mumbai Indians registered an amazing win by 5 wickets and 31balls to spare against its arch-rivals Chennai Super Kings. MI won the toss and opted for bowling first. Ruturaj Gaikwad and Devon Conway opened the innings for CSK. Considering the good start given by these two openers in the last three matches and their good form, the hopes of CSK fans were very high. Mi’s Daniel Sams collapsed CSK fan’s hope by picking up Devon Conway in the second ball of the inning by LBW out. The on-field umpire gave the decision in favor of Danil Sams even though the ball looked like sliding down the leg in the replay. Due to a power cut in the stadium, it was not possible for Conway to go for DRS. The replay clearly showed the ball misses the leg stump

As Devon Conway went unlucky, Robin Uthappa was also taken away for an LBW off MI pacer Jasprit Bumrah who also couldn’t review by DRS for the same power cut reason. Power returned in a short period of time after Uthappa’s dismissal, with a score of 5/3 at the end of the second over. Even the floodlight towers went dark troubling the match and leading to a delayed start.

The CSK fans were furious and social media overflowed with frustration. Former cricketers Virender Sehwag also pointed out that the ‘Men in Yellow’ were at a “disadvantage” due to the unavailability of DRS.

Indian commentator Harsha Bhogle, a member of the broadcasting team for Star Sports was watching the game at the venue.  He posted a clarification about the power cut and DRS even with the generators available, on his official Twitter account. Bhogle explained the reason behind the DRS’s unavailability even though generators were available for lights inside the stadium.

“When you lose power, the generators come on automatically and that is how the coverage continues. But some machines need to reboot and that takes time and that is when DRS is unavailable. This is the situation all over the world. It has nothing to do with budgets or planning,” Bhogle wrote.

“I have been at many tournaments and bilateral games that have continued without DRS for a while. That is the global protocol. As soon as the machines are ready, DRS resumes. The production set-up here is world-class. Sorry if that comes in the way of easy anger.

“The umpire probably got it wrong, it was called out, and everyone has off days. But I will say this. A lot of the comments (remember the outrage on the high full toss in the last over of DC vs RR) have arisen out of not knowing the laws. The umpire was right that day but copped abuse,” wrote the commentator.

The ‘DC vs RR’ incident mentioned by Bhogle in his tweet was about the no-ball controversy. DC skipper Rishabh Pant signaled batters Rovman Powell and Kuldeep Yadav to come back to the dugout. A high full-toss from Obed McCoy was hit by Rovman Powell for a six. But the DC camp argued it is a no-ball. The on-field umpires stood by their decision and DC lost the match by 15 runs.

CSK was collapsed for 97 runs by brilliant bowling from Daniel Sams at the start of the innings and support from other MI bowlers. MI chasing an easy total of 97, the new MI team played a blasting knock. In the start, MI lost four crucial wickets in the power play with a score of 36/4 in 6 overs. The young Tilak Varma scored 34 runs off 32 balls unbeaten has broken the hopes of CSK to the playoff.