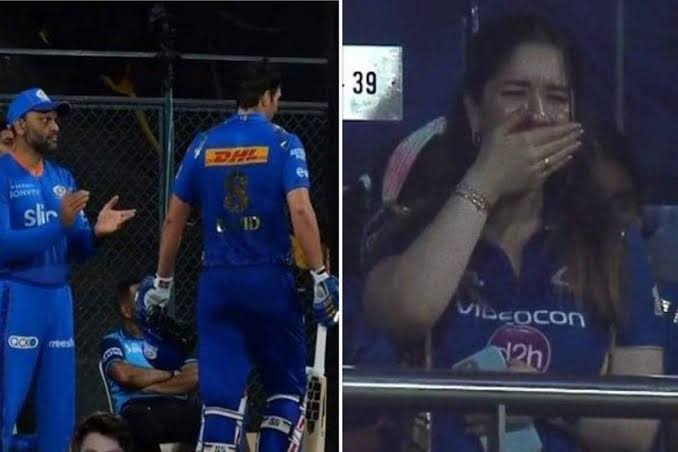 Mumbai Indians batter Tim David has played a blistering knock against SRH at Wankhede Stadium and proved everyone why he is rated so high in T20 format. He smashed 46 from 18 deliveries including four sixes. MI fans hoped they will win the match but Tim David’s unfortunate run out broke their heart. It was seen that Sachin Tendulkar’s daughter Sara Tendulkar also showed her disappointment after David’s dismissal.

Chasing 194 to win the match, Mumbai Indians started very well but SRH young speed star Umran Malik took three quick wickets and turned the game in SRH way. When MI needed 44 from last 3 overs, explosive batter Tim David hit three sixes against T Natarajan including huge 114 meter six and took the equation to 19 from 13 balls. He wanted a single on the last delivery of 18th over but he got ran out. In 19th over Bhuvaneshwar Kumar bowled unimaginable way and finished the over without giving a single run. At last MI lost the match by 3 runs.

After the match MI skipper Rohit Sharma also talked about Tim David’s run out. “Till about the second to last over, I thought we had it. Unfortunate runout of Tim David.. but we thought we were very much in the game till that runout,” Rohit told during post match presentation.

“Even 19 runs to go with two overs, you would back yourself to get that but unfortunately we couldn’t do it. Credit to Sunrisers to hold their nerve. It was a very tense moment and they held their nerve very well at the back end,” he added.