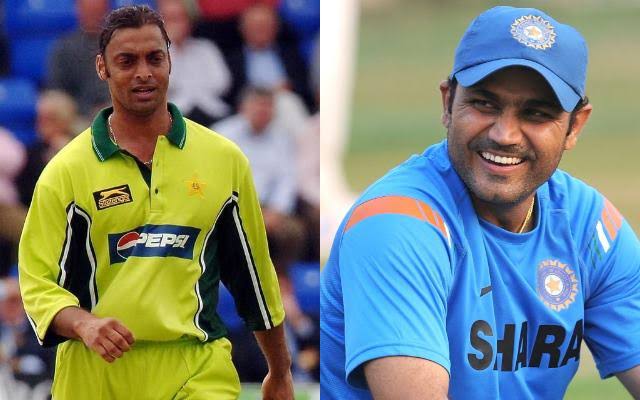 Former Indian opener Virender Sehwag retired 7 years ago but his explosive batting has continued off the field. During a show on Sports 18, Sehwag made a big statement on Ex-Pak pacer Shoaib Akhtar. He said that “Akhtar was chucking the ball. Why would ICC ban him otherwise ?” Nawab Of Najafgarh also said Shoaib was aware about it.

Meanwhile, Shoaib Akhtar is widely regarded as Rawalpindi Express for his fiery bowling. He bowled fastest delivery in the international cricket. In 1999 ICC banned him for a month for his chucking bowling and he came back in cricket after remodeling the action.

“Shoaib knows he used to jerk his elbow; he knew he was chucking too. Why would ICC ban him otherwise?” Sehwag told Sports 18. “Brett Lee’s hand came down straight, so it was easy to pick the ball. But with Shoaib, you could never guess where the hand and the ball will come from.”

Former aggressive opener picked Newzealand pacer Shane Bond as toughest fast bowler.“His deliveries would come swinging into your body, even if he bowled outside off stump,” he said.

Ex-Delhi batter also said that he never feared to face Brett Lee but he couldn’t trust on Shoaib for what he would do, after he hit him for two consecutive boundaries.

“I never feared facing Brett Lee, but with Shoaib, I could not trust what he would do if I hit him twice to the fence. Maybe a beamer or a toe-crushing yorker,” Sehwag said.

Virender Sehwag enjoyed to face Pak bowlers during his playing days. He scored 1276 runs from 14 innings with an average of 91.14 including one tripple ton and four hundreds.

Cricket rules that need to be changed
VVS Laxman is likely to coach Team India for SA series and Ireland tour : Report