Former Pakistan Crickter Rashid Latif has identified a fault in Kohli’s batting. He also compared between Virat and Sachin’s batting on Low Pitches. 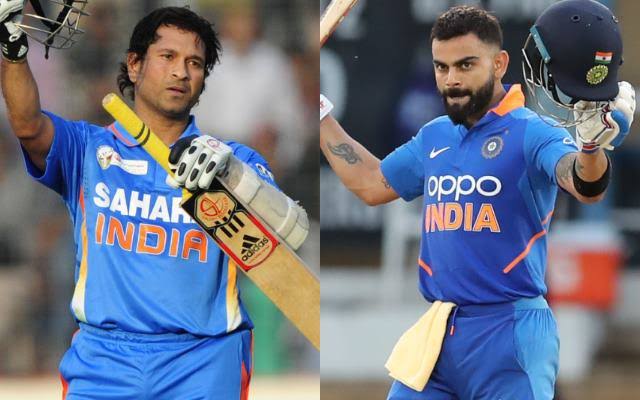 Virat Kohli, one of the finest batter of all time and probably the greatest of his generation, also called as “Run machine”. Virat Kohli accumulated with 841 runs in his last 30 test innings since 2020 with six fifty plus scores.

But currently Kohli is sliding towards the worst phase of his career as he did not score any century in last two years, after scoring a century against Bangladesh in November 2019. His inability to score big runs has been a concern nowadays. Virat Kohli is always compared to the great Sachin Tendulkar as both of them were trendsetters in their era.

Comparison Between Virat and Sachin

Former Pakistan wicket keeper Rashid Latif has identified a fault in Kohli’s batting and the reason behind why he is struggling.

“When I speak about Virat, he always used to go across the stumps. But he never believed in date, stats, coaching. He is a great player but got caught. A bottom hand player who goes across, he got caught there. That is why when the ball goes away, he would have a problem,” Latif said on YouTube channel conversation.

“Recently, Sri Lanka came to India for a Test series. The ball was kept low. On such low pitches, Sachin would never get out, whereas Virat did. Tendulkar would change his strategy. He would come inside the crease if it’s spinning too much, and vice-versa. Sachin has had this problem a few times – like Asif dismissed him in Karachi (2006), but most often he would adjust. So this is the difference if I have to compare (Kohli and Tendulkar). On poor pitches, there is no batsman better than Sachin”.

“I recall, once South Africa came to India. The pitch was breaking. He came close to the wicket and lengthened the length. And boy, he batted so well. He scored some 40-50 runs but it was outstanding. So, this is the difference between the two and that is the fault (in Kohli’s batting). And I’m sure he will be working on it. He is a great player. Once he gets out of this slump, he will give you 10 centuries a year,” he concluded.
Virat Kohli is currently playing for Royal Challengers Bangalore (RCB) in IPL 2022 against Chennai Super Kings (CSK) on April 12 (Tuesday) at Dr.DY Patil sports academy.