Virender Sehwag presented Sachin with an amusing gift while recalling the memories of their times together. 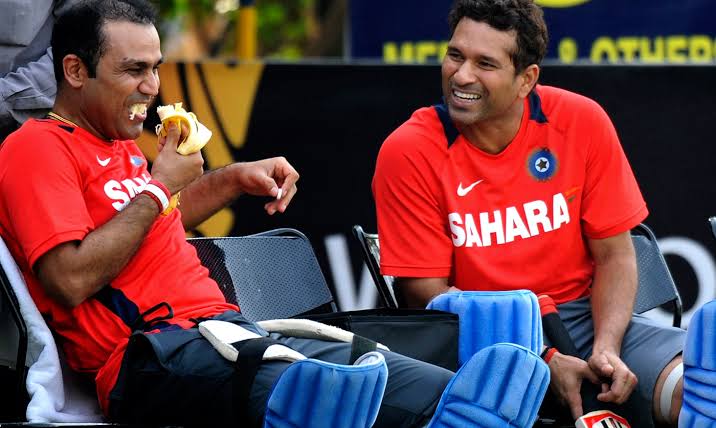 India’s cricketing icon Sachin Tendulkar, popularly known as the ‘God of Cricket’ celebrated his 49th birthday last week on April 24. Virender Sehwag presented Sachin with an amusing gift ‘the gift of Silence’. In a video on Twitter, Virender Sehwag revealed a unique connection between them and recalled the memories of their times together. Sehwag used to be an opening partner in the game for India alongside Tendulkar.

Tendulkar thanked his former teammate for the wish and also for entertaining everyone on and off the field.

“Ha ha ha….iska matlab tu sirf 24th April ko hi chup baithega?! Thank you for your wishes, Viru! You’ve entertained us on the field and you continue to do it off the field as well with your unique wit,” Tendulkar replied.

Sehwag revealed that in the dressing room, Tendulkar used to feed him bananas to keep him silent. Sehwag also said that he won’t speak on his birthday except to wish him and keep eating bananas.

“Sachin Paaji’s biggest expectation from me was to remain quiet while watching the match from the dressing room, whether I score runs or not. To keep me quiet, he used to feed me bananas, so that when I eat those bananas, I won’t speak much during the process. So today, on his birthday, my biggest gift to him will be my silence. I won’t speak anything today. Wish you a very happy birthday Paaji,” said Sehwag.

Sachin and Sehwag are known for sharing a special bond both on and off the field. Batting together, they scored 3919 runs in 93 innings.

Tendulkar is regarded as one of the greatest batsmen in the history of cricket with an international career spanning over 25 years. He made his debut at the age of 16. Sachin retired with the highest run-getter in the history of international cricket scoring 34,357 runs across all formats of the game. He scored 100 centuries which was from 51 in Tests and 49 in ODIs. Sachin Tendulkar holds a world record for the highest number of centuries by a batsman.