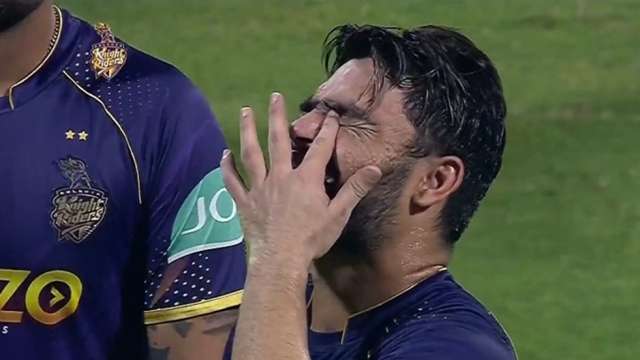 It was a heart rending match between KKR and LSG at DY Patil Stadium yesterday night. The 24 year old KKR batter Rinku Singh raised the heartbeat of the LSG camp for a moment but he failed. Chasing a huge target of 210, KKR fell short of two runs and their IPL journey came to an end for this year. Lucknow’s both opener played majestic innings in the match. Wicket keeper batsman Quinton De Kock smashed unbeaten 140 runs and helped the franchise to reach playoffs.

Kolkata needed 21 runs from the penultimate over of the match. LSG all-rounder Marcus Stoinis came to attack to defend those run. When KKR fans almost lost their hopes then Rinku Smashed the very first delivery over infield for a boundary. After that the uncapped Indian batter hit two consecutive sixes and equation became 5 from 3 balls. Then he took sensible two runs of 4th ball of 20th over. The tragic incident happened on the next ball when Rinku Singh wanted to smash over extra cover but Evin Lewis took an unimaginable one handed catch. Rinku played exceptional knock of 40 from 15 balls. At last KKR lost by 2 runs.

Rinku Singh was picked by KKR in 2018 for 80 lakhs and remained with the franchise till 2021 when he was ruled out due to injury. Kolkata again brought him back in the IPL mega auction for this year.
Young sensational batter acknowledged KKR for giving him chance and showing trust on him. He also recalled his struggle days when he was recovering from a knee injury in 2021.

“Those 5 years were really tough for me. After the first year, when I was picked for KKR and I got a chance to play, I couldn’t perform well. Still, KKR trusted me a lot and they retained me for the next couple of seasons,” said Rinku in a video uploaded on KKR’s official Facebook page on Wednesday as quoted by Hindustan Times.

“I trained hard the way my body language is. The team never thought I was down. Last year was quite tough for me as I got a knee injury during the Vijay Hazare Trophy while running a double. The moment I fell, I thought of the IPL. They told me I needed an operation and would require 6-7 months to recover.”

“I wasn’t happy staying away from cricket for so long. My father didn’t eat for 2-3 days. I told him its’ just an injury and it’s part of cricket. I’m the sole breadwinner of my life and when such things happen, it is bound to be worrisome.”

“I was a bit sad, but I knew I would recover quickly as I had a lot of self-belief,”  he added.

He has a good cricketing brain, could be an all-format player for India : Gavaskar praises this youngster
BCCI takes a crucial decision . . . change in IPL finals