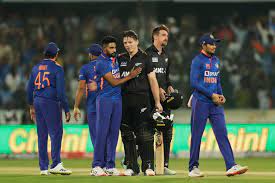 Can India take a 1-0 lead? Catch it live on Disney + Hotstar to find out

Cricket to us was more than a play, it is worship in the summer sun, A cricketer need not have to play every ball but every ball needs his judgement.

ND vs NZ – ICC ODI Rankings – India’s Chance to be No. 1?  India vs New Zealand ODI Series will be TEAM INDIA’s chance to become No. 1 team in ICC ODI Rankings. New Zealand currently is ranked on top but India can replace them with whitewash in the series. Rohit led team has already beaten Sri Lanka 3-0 and same score line against the KIWIS will make them the NO. 1 ODI Team in the WORLD: Follow India vs New Zealand LIVE Updates with InsideSport.IN and Disney+ hot star

India are currently 4th on the ODI rankings behind NZ, England and Australia with 109 ranking points. With 3-0 WIN OVER Sri Lanka, India has reached 110 POINTS. A 3-0 clean-sweep against NZ will help India surpass NZ with 114 points.NZ will drop down to 4th due to negative points. England will stay No 2 while Australia will be No 3.

Suryakumar Ashok Yadav is an Indian international cricketer who plays for the Indian cricket team., who has been waiting for his turn on the bench since the first two matches, may get a chance in the third and final ODI. Surya was also seen sweating profusely during the training session. Surya, who has scored three centuries in the last six months in the T20 format, can prove to be the trump card of the Indian team in the ODI World Cup.

Team India batter Shreyas Iyer has been ruled out of the upcoming 3-match ODI series against New Zealand due to a back injury. He will be heading to the National Cricket Academy (NCA) for further assessment and management. The All-India Senior Selection Committee has named Rajat Patidar as a replacement for Shreyas Iyer,” BCCI said in the official release.

More Cricket to Come : President of the Asian Cricket Council (ACC), Jay Shah, announced the upcoming calendar of Asian cricket events via a tweet on Thursday, 5 January. According to the schedule, the next edition of the Men’s Asia Cup will be held in September 2023, just a month before the ICC Men’s ODI World Cup 2023.