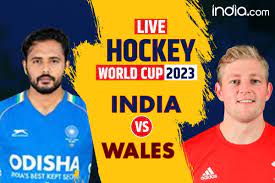 India vs Wales Group D match of the 2023 Men’s Hockey World Cup was played at the Kalinga Stadium in Bhubaneswar on Thursday- January 19, 2023.

India beat Wales 4-2 in Pool D match to finish in second place in the pool with seven points. India will now play a cross-over match against New Zealand to qualify for the quarterfinal.

Needing to win by a margin of eight goals to qualify directly for the quarter-finals on Thursday, India failed to live up to the expectations as they finished second in Pool D behind England.

Akashdeep Singh (32nd and 45th minutes) struck twice, while Shamsher Singh (21st) and Harmanpreet Singh (59th) got the other goals for India. Gareth Furlong (42nd) and Jacob Draper (44th) were the goal-getters for Wales.

New Zealand lost its last group game against Malaysia 2-3 on Thursday 19th’2023 and will meet India in the crossover. Malaysia, on the other hand, will take on Spain, who finished third in Pool D, in the crossover fixture.

The winner between India and New Zealand will advance to the quarterfinal and play against the winner of Pool B. As the points table stands, either Belgium or Germany can top Pool B.

This is the first time India is playing in a crossover fixture at the Hockey World Cup. In 2018, India ended the group stage on top spot and directly progressed to the quarterfinals.

Both India and England ended their pool engagements on seven points each after winning two matches and drawing one, but the European side topped Pool D on the basis of superior goal difference.

England, who had outclassed Spain 4-0 in the earlier Pool D match here, have a better goal difference of plus nine as against four of India.

When two teams are on equal points and have won the same number of matches, the ranking is decided by goal difference.

England, who are in the quarter-finals, will have to wait for the results of the crossover matches to know their opponents. They will play their last-eight match on January 25 against the winner of the second-placed team in Pool A vs the third-placed side in Pool B. Wales, ranked 14th as against India’s fifth, punched above their weight as their defence did a commendable job in the face of incessant attacks.

The last-round matches of Pool A and Pool B will be played on Friday 20th in Rourkela, the co-host venue.