India crashed out of the FIH Men’s Hockey World Cup 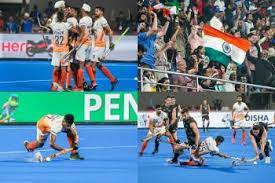 IND vs NZ, Hockey World Cup 2023: New Zealand defeat India in a penalty shootout, will face Belgium next in the QFs

India vs New Zealand Hockey Match Today Highlights: India crashed out of the FIH Men’s Hockey World Cup after losing 4-5 via penalty shootout to lower-ranked New Zealand following a 3-3 stalemate after the regulation time in a crossover match here on Sunday.

India, ranked sixth in the world, produced a below-par performance, allowing New Zealand to claw back into the match after taking a 2-0 lead in the first half.

Of the many things PR Sreejesh would’ve expected before he joined the national team set-up nearly 20 years ago, a test for colour blindness must not have been one of them.

And yet, one of India’s best hockey goalkeepers of all time was made to sit on an ophthalmic chair, recognising designs and shapes, and get examined for – among many things – colour blindness.

“Many players realised they had a number when they came to the national camp,” former India goalkeeper Adrian D’Souza says. “So, we would all have our eye tests done. They did an in-depth test for goalkeepers because we had to see much more clearly than an average hockey player. I did it, Sreejesh did it… we used to get marked on the basis of that.”

D’Souza doesn’t remember their scores. But given how sharply Sreejesh’s eyes pick the fast-moving ball even today, at the age of 34, it must have been with flying colours.