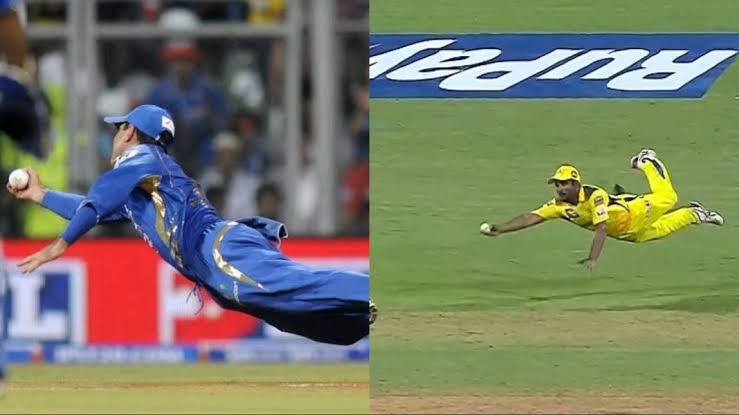 Indian Cricket Legend Great Sachin Tendulkar was much impressed with Ambati Rayudu’s catch during the match between CSK and RCB in the current IPL series.

Ambati Rayudu stunned with a one-handed catch putting a full-fledged dive off the bowling of Chennai Super Kings captain Ravindra Jadeja to let go of Akash Deep on the Tuesday series.

Tendulkar pointed out that, the catch reminded him of Ricky Ponting’s iconic catch from the IPL 2013. In the sixth edition game between Mumbai Indians and Delhi Daredevils (now Delhi Capitals), Ponting took a similar one-handed catch off the bowling of Harbhajan Singh. This still remains as one of the most magnificent and iconic moments in the IPL league.

“Rayudu’s catch off Jadeja’s bowling reminded me of Ponting. It was just magnificent. Bengaluru would still be thinking that if they hadn’t lost too many wickets up top, they would have probably chased the total down.” Tendulkar said on his YouTube channel.

“Jadeja bowled well in partnership with Theekshana. He used his experience against danger man Maxwell. ‘If he misses, I hit the stump’ and that is exactly what happened. The experience came in handy.”

Tendulkar also pointed out that RCB had winning chances if they have not lost so many wickets early.

“When the team is chasing 217, the batsmen have to take risks. I felt towards the end that RCB was thinking that if they had not lost so many wickets in the beginning, this match could have been closer and they might have even chased the total down. Eventually, we always think that we should conserve wickets early on but at the same time, there was a need to put runs on the board. It was a tough total to chase,” said Tendulkar.

See also  IPL 2022: “I Take the Full Responsibility for Not Putting the Team Towards Winning”: Rohit Sharma

IPL 2022 – RCB vs. CSK: RCB’s Reason Behind the Black Armband during the Match
Watch: Baby AB Dewald Brevis Bashed with Consecutive Sixes off Rahul Chahar’s Over – IPL 2022 MI vs. PBKS