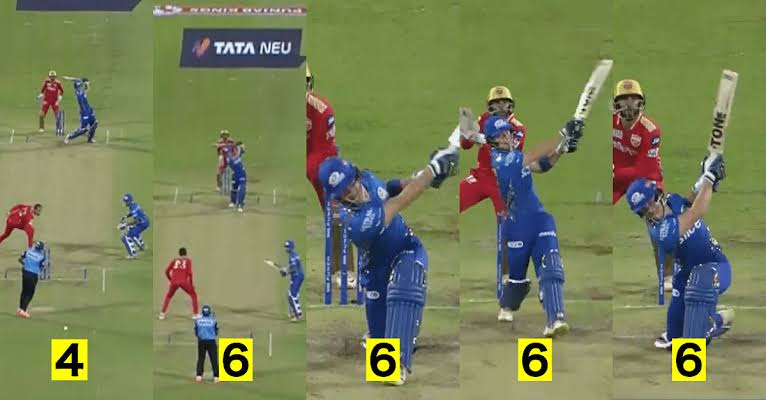 On April 13, Wednesday Dewald Brevis gave a stunning performance by hitting four back-to-back sixes and a boundary off Rahul Char’s over in MI vs. PBKS 2022 league.

Dewald Brevis was the highest run-scorer in the under 19 world cup. He was bought by Mumbai Indians for Rs.3 crores at IPL 2022 mega auction.

This youngster Dewald Brevis was nicknamed ‘Baby AB’ after the legendary batter AB de Villers gained a total score of 49 in this game. Dewald Brevis bashed with consecutive four sixes with a boundary off Rahul Chahar’s over gaining 29 runs in 6 balls.

Brevis reached a score of 49 and tried for another big shot but unfortunately, the wicket was picked by Oden Smith’s bowling and Arsdeep’s clean catch. At last, Brevis gained up a total of 49 runs with four boundaries and five sixes making him the ‘talk of the town’.

The leg spinner changed his lines and lengths but the ball was flying into the stands of MCA stadium and strut this season’s longest six at 112 meters. It was a real treat for fans and gained worldwide attention. Even Brevis was enjoying his big shots.

Talking About the Match:

Mumbai Indians skipper won the toss and Punjab Kings was asked to bat first. With Mayank Agarwal score of 52 runs off 31 balls and Shikhar Dhawan with 70 off 50 balls gave Punjab Kings a good score of 198/5. But Mumbai Indians had a bad start, losing skipper Rohit Sharma and Ishan Kishan early. Tilak Verma (35) and Suryakumar Yadhav’s (48) effort was not enough to chase 198. Mumbai Indians lost the game with a difference of 13 runs scoring 186/9 in 20 overs at Maharashtra cricket association stadium.