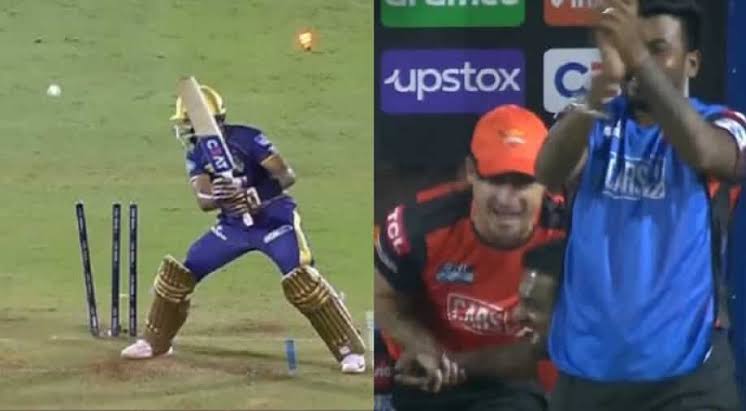 Sunrisers Hyderabad won Kolkata Knight Riders (KKR) by seven wickets at the Brabourne Stadium in Mumbai on April 15. Sunrisers Hyderabad (SRH) fast bowler Umran Malik has been the talk of the town and never failed to impress everyone with his pace bowling in this IPL. He has bowled in a way making the life of batters a bit difficult.

Malik was on fire bowling against the Knight Riders as he finished with excellent figures of 2/27 in his four overs for KKR to score 175/8 in 20 overs. He bowled an unplayable yorker to clean up KKR skipper Shreyas Iyer in the game.

The reason behind the two legendary cricketers Dale Steyn and Muttiah Muralitharan’s celebration was Umran Malik’s Yorker cleaned up KKR skipper Shreyas Iyer on April 15 in the IPL series. After the match where SRH won by 7 wickets, Steyn revealed the story behind their celebration.

Muralitharan said that a yorker would be the ‘perfect ball’ to Iyer at the point as the right-hander was backing away. Steyn and SRH head coach Tom Moody were not sure. They thought Iyer would smash a four for the yorker, but as Murali said it turned out to be perfect and swept Iyer’s wicket.

“I’m not going to lie to you. Sometimes, the players’ genius comes out. Murali (Muttiah Muralitharan) actually said that he thinks the perfect ball to bowl right now is a yorker. Tom (Moody) and I turned around and said, ‘no, if he bowls a yorker now, he is going to be hit for a four-over his head’. He runs in, bowls a yorker, and knocks the stumps out of the ground! So, honestly, what do I know?” Steyn said after the match as reported by ESPN Cricinfo.

“The genius is in the players, guys. They have to do what they have to do, and when they have to do it I just jumped into Murali! I was like, “you are a spin bowling coach and now you are making these amazing calls,” said Steyn,

Malik has consistently bowled deliveries at 145 to 150 km per hour this IPL. He bowled the fastest delivery in IPL history with the one clocking 153.1 km/hour against Chennai Super Kings on Saturday.

“At the end of the day, when you are bowling 150 kph in this format, you don’t expect you are not going to go for runs. He goes for a lot of runs behind the wicket. But it’s not like he is getting smashed down the ground or through the covers,” SRH head coach Moody concluded.

IPL 2022 | Ishan Kishan smashes boundary cushion in frustration after getting out – WATCH
“Virat Kohli wouldn’t have scored much if I played against him”: Shoaib Akhtar – IPL 2022