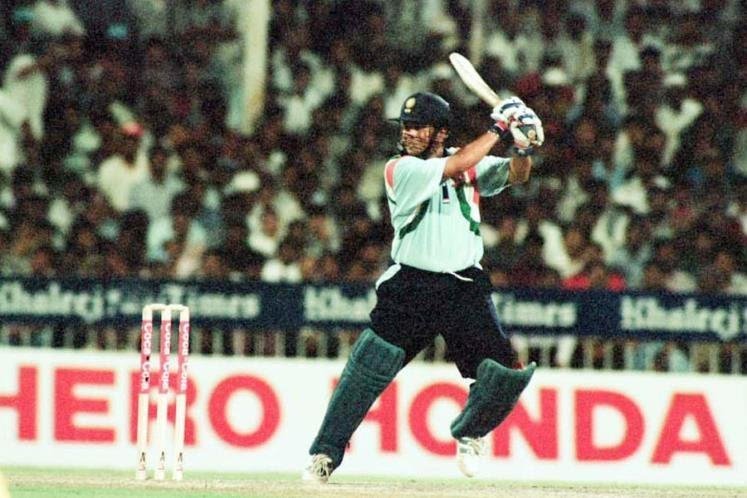 Indian legend Sachin Tendulkar is one of the greatest batsmen in the history of cricket. Tendulkar has played many world-class innings in his long cricketing career. He played a total of 664 international cricket matches scoring 34,357 runs.

It was on this day, 23 years ago, when former Indian batsman Sachin Tendulkar scored 143-run against Australia in the coca-cola cup. It was an eye-catching inning of his life. Sachin under his own steam tried to take India into the finals of the Sharjah Cup.

Batting first, Australia had scored 284/7 with Michael Bevan’s knock of 101 runs. Due to a sandstorm, the target was adjusted to 276 from 46 overs for India.

Chasing 276, India lost its opening wicket of Sourav Ganguly with 17 runs in the 9th over. Tendulkar got some stand from Nayan Mongia (35) and Mohammad Azharuddin (14).  But later he carried the entire chase on his shoulders against the high-profile bowling of Australia. The ‘Master Blaster’ scored 143 runs in 131 balls with nine fours and five sixes. And finally, he was taken off by Damien Fleming in the 43rd over.

After his dismissal, set a void in the team and was not able to chase down the desired target. This innings by Tendulkar is famously referred to as ‘Desert Storm’ as the Tendulkar tore the Australian bowling attack.

India could only score 250 runs in 46 overs after Sachin Tendulkar and lost the match by 26 runs. But the Indian team did not go down without a fight. It was considered ‘unattainable’ to score a 250 plus in the 1990s. Even though India fell 26 runs short of victory, Tendulkar’s hand lifted his side beyond the required 237 to edge out New Zealand and qualify for the finals after two days.

In Coca Cola Cup finals, India and Australia clashed again. And it was again Tendulkar who played a match-winning knock for India. Chasing 273 in the finals, Tendulkar scored 134 runs with 12 fours and three sixes. And India won by six wickets.