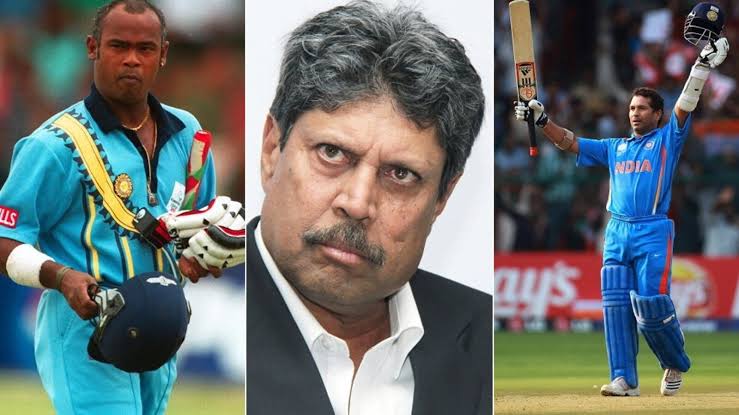 Former Indian legend Kapil Dev has cited Vinod Kambli’s example to warn the youngsters. He said if you have talent but don’t work hard then you “can go the Vinod Kambli way”.

India won the world cup under Kapil Dev’s captaincy in 1983. Former vertan all-rounder hails Sachin Tendulkar and said that the legendary batting maestro is the perfect example of ‘talent and hard work’. Master Blaster scored record runs and century in international cricket during his 24 years of splendid career. He was widely regarded as God Of Cricket for his unprecedented achievements in the history of cricket.

While his childhood friend Vinod Kambli was also talented like him but sudden success distracted him. Kapil Dev has cited his example to warn youngsters to be focus on your passion , hard work’and commitment. Left handed former Indian batsman scored 1084 runs in Test and 2477 runs in ODI cricket. He is still remains the youngest Indian to score double hundred.

Kapil Dev compares between Sachin and Kambli on their hard work. Acoording to TO, during an interaction with students of Parul University legendary all-rounder said
“Sometimes, youngsters take up something to impress others. I believe that it is important to love yourself first and bring passion to whatever you like. There are no substitutes for passion, hard work and commitment. Sachin Tendulkar is the perfect example of talent plus hard work. If you are talented but not hard-working enough, then you can go the Vinod Kambli way. If your destiny is beautiful, why worry about the road ahead,”

He also advised, if you are passionate on your work then you can achieve anything. “I don’t believe in speaking much and I have always been a man of action. I believe that if you are passionate enough, you can achieve anything. While practicing as a youngster, I would play for hours and I wouldn’t know the difference between day and night. I would wonder why I couldn’t carry on playing at night. When you love something, you forget about the time and everything else,” mentioned Kapil.

Kapil Dev also talked about his surreal 175 against Zimbabwe in 1983 world cup. There is no video footage of this match as broadcasters were on strike. “Bahot log shayad ye sun sun ke pak gaye honge, ki wo innings ke videos nahi hai. However, it’s all recorded in my head and while I feel sorry for the people that they couldn’t watch that match, I prefer to look at the positives. We talk so much about that innings because there is no recording. Otherwise, I don’t think people would ask me about that innings even now.” He further added.