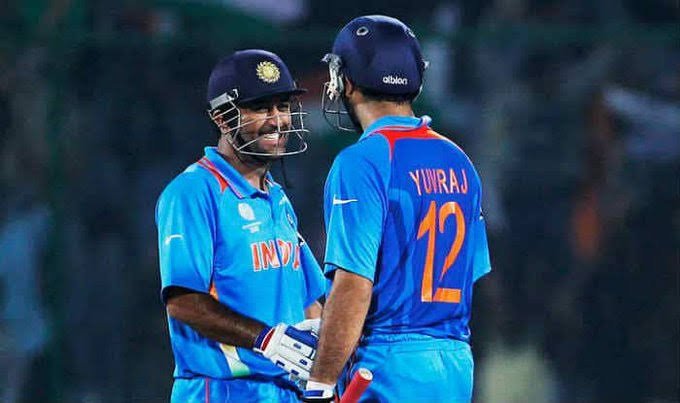 India won the 2011 world cup on 2nd April at Wankhede Stadium under MS Dhoni’s captaincy. But the memory still remains inscribed of every Indian. “Dhoni finishes off in style. A magnificent strike into the crowd! India lift the World Cup after 28 years!” said Ravi Shastri after MS Dhoni smashed a massive six off Sri Lanka pacer Nuwan Kulasekara and won the title after 28 years. Chasing 275 Team India lost their both openers early. Then Virat Kohli and Gautam Gambhir stitched a solid 83 run partnership. When both were batting, a dressing room discussion was happening on the game plan. This tactics had changed the whole scenario. Yuvraj Singh reveals that epic story.

“Mahi going to bat ahead of me in the 2011 World Cup final was more of a team decision, I think. When Virat and Gautam were in the middle of a decent partnership, a conversation had happened in the dressing room,” Yuvraj said on Home of Heroes on Sports18.

“Viru, Sachin, Gary and Mahi may have had a discussion and planned that a left-right combination is needed in the middle because two off-spinners were bowling at that time. It was decided that if Virat gets out Mahi will go in the middle and if Gautam gets out, I will bat next,” he further added.

Mahendra Singh Dhoni’s unbeaten 91 and Gautam Gambhir’s 97 helped India to lift the trophy.Yuvraj Singh was awarded Player Of The Tournament for his outstanding all-round performances. Master Blaster Sachin Tendulkar was the second highest run getter of the World Cup and Zaheer Khan took most wickets in the prestigious tournament. MS Dhoni won the Man Of The Match award.

Why no Yuvraj, why did I bat ahead ? : MS Dhoni

“I took a quite few decisions tonight, if we hadn’t won I would have been asked quite a few questions: Why no Ashwin, Why sreesanth. Why no Yuvraj, Why did I bat ahead?! That pushed me and motivated to do well.The pressure had got to me in the previous games. In this game, I wanted to bat up the order and Gary backed me and by the senior players. I had a point to prove to myself. Virat and Gautam batted brillantly; lots of singles. Then with the help of bit of dew , we put pressure on the spinners. I would have liked Gautam to go on and get that big hundred.” Dhoni said after end of the match.

Winning the world cup proudest moment of my life : Sachin

“Couldn’t have asked for anything more than this. Winning the world cup is the proudest moment of my life. Thanks to my team-mates. Without them, nothing would have happened. I couldn’t control my tears of joy. Thanks to the support staff. Thanks to Mike Horn, who has helped with the expectations and pressure. The team stuck together in the rough phases and proved people wrong who doubted our ability. Self belief has been always there but in the last two years, we have been very consistent. It’s been great honour to be part of this team. Thanks to Gary and Paddy Upton.” Tendulkar said.

Gautam Gambhir said “All credit goes to Sachin Tendulkar. We played for him. Beating Australia and Pakistan and now this, its a dream come true.”