IPL 2022: Rinku Singh reveals his past before his IPL journey and his long time wait to get the player of the match 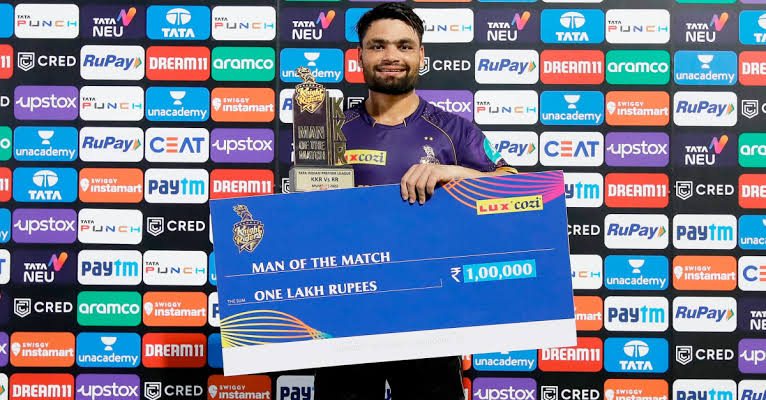 Kolkata Knight Riders on 2nd May chased down a target of 153 runs against Rajasthan Royals (RR) in the Indian Premier League (IPL) 2022. Kolkata Knight Riders’ Rinku Singh became the talk after he scored an unbeaten 42 runs off 23 balls by hitting six fours and two sixes to help KKR win by seven wickets. He also won the player of the match award for his best performance with the bat.

When Rinku Singh came out to bat, Kolkata’s score was 92 for 3 in 12.5 overs and the team needed 61 runs in 43 balls. With his amazing performance smashed the ball to secure their fourth win of the season. After KKR won against RR, they bought back hopes for a playoff in the IPL 2022.

Rinku Singh and his family before IPL:

Rinku Singh was bought by KKR for Rs 80 lakh in the current IPL auction. He comes from Aligarh & from a lower-middle-class family. As his family is very big and he had to fight odds all his life so he topped and did well when under pressure. His father delivers LPG cylinders to homes; an elder brother drives an auto-rickshaw with another brother working in a coaching center.

“Socha tha 20 lakh mein jaoonga, (thought I would get 20 lakhs), but I was picked up for 80! The first thought that came to the mind was that I can contribute in my big brother’s wedding, and save up something for my sister’s wedding too. Aur ek achhe se ghar mein shift ho jaoonga.” Rinku was quoted by Indian Express in past.

“Father used to earn some Rs 6-7 thousand monthly, as was the elder brother. My family is a bit big and I had no option other than to focus hard on cricket. Life mein struggle bahut kiya, may be God is repaying for those days,” he was further quoted by the paper.

Rinku said that he went to work as a sweeper to support his family but could continue and tried his luck in cricket.

“He took me to a place where they asked me to be a domestic worker saaf, safaai aur pochaa maarna (sweeping and mopping). I came back home and told my mother, ‘I will not go again. Let me just try my luck in cricket,” he told The Indian Express.

Rinku Singh – Player of the match:

In a conversation with Nitish Rana after the match, Rinku said that he had written ’50’ on his palm before the match. he was waiting for his chance for the last five years. This conversation between Rana and Rinku was shared on KKR’s official Twitter handle.

Rinku said, “I was feeling like I would score runs today, be the man of the match and I myself wrote 50 with my own hand.. and made heart. I was waiting for a long time to get the player of the match. It came after 5 years but it came at last.”

In nine Ranji Trophy games, Rinku has scored 692 runs with an average of 49. He is rated highly in the domestic circuit where he plays for Uttar Pradesh and also made his IPL debut in 2018. Last year, Kings XI Punjab had taken him in their team but he gets chances to play. The game against the Royals was his 13th match in the IPL.

“I am the first to play IPL from Aligarh, though many have played Ranji Trophy. There is pressure in the IPL that is not there in first-class cricket. It`s been five years, I haven`t been getting chances regularly. Feels good to contribute now,” he said after the post-match presentation.

Watch : Right Handed David Warner plays “shot of the tournament” against SRH
IPL 2022: “It’s my wish but I know it’s never going to happen” – Hardik Pandya wants this MI player in his team