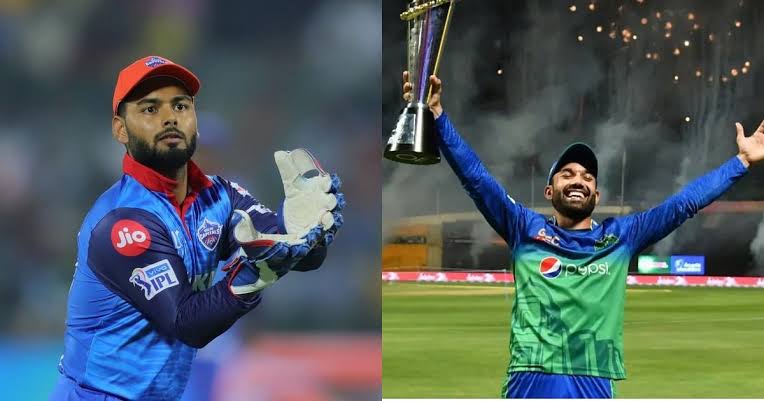 Former Pakistani cricketer Aaqib Javed considers Mohammad Rizwan is better than Rishabh Pant in his present form. Mohammad Rizwan is a rising player for the Pakistan cricket team. The wicketkeeper was one of the main players in Pakistan to reach the semi-finals of the T20 World Cup 2021. He is also part of the leadership group. Indian Player and current DC skipper Rishabh Pant also showcased his talents with his aggressive batting and heroics across formats. Both the wicketkeeper-batters rose the fame at the same time in this modern cricket era. The comparison among veterans has been common in any form of sports. Former Pakistan pacer Aqib Javed joined the bandwagon earlier this week. And debate about the best player, comparing Rizwan and Pant during an interview with ARY News’ show Sports Room.

Aaqib Javed feels Rizwan is better than Pant in current form. And he has given one important reason behind the logic.

“Rizwan has improved recently, Pant is a skilled player, but due to Rizwan’s handling of the situation, Pant remains… Being aggressive does not imply hitting a few huge, powerful shots and then leaving”.

Javed says that Pant is an aggressive player. But it doesn’t mean hitting a couple of big shots and getting out. But should stay at the crease, fighting, and finishing the game.

“Aggressiveness and mental tenacity simply staying at the crease to the end and finishing matches,” said Aaqib Javed.

Javed was the key member of the Imran Khan-led side that won the World Cup in 1992, and also made a comparison of Jasprit Bumrah with Shaheen Shah Afridi.

“I now think that Shaheen is better than Bumrah because when Shaheen came into the international circuit, Bumrah had already established himself and the critics used to say that Bumrah is doing well in Tests, T20Is, and so but now Shaheen has proved he is even better and has more capacity than Bumrah”.

In the last few years, Virat Kohli’s form has gone down a bit and his last hundred was against Bangladesh during India’s maiden Day-Night Test at Eden Gardens in Kolkata in November 2019. On the other hand, Babar Azam is in stunning form and has scored two back-to-back centuries against Australia in the recently concluded three-match ODI series. He also scored a couple of hundreds on the first two Tests as well.

And looking at the current form of both these players, Aqib Javed has given his conclusion on the long-running debate of being best between Virat Kohli and Babar Azam.

“Now I think Babar is ahead. He (Kohli) had his peak, but now it is going down. But Babar, on the other hand, is going up,” Aqib said.