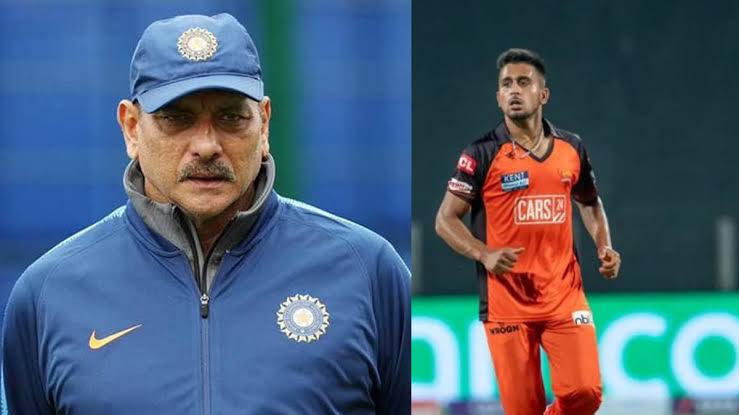 Sunrisers Hyderabad pacer Umran Malik brought back Sunshine to his team against Mumbai Indians at Wankhede Stadium yesterday night. Young sensation has showed another magical bowling performance and took three important wickets of Ishan Kishan, Daniel Sams and Tilak Varma. After his incredible bowling display former Indian coach Ravi Shastri urged BCCI to give a central contract straightway for this Speedster. He also advised to keep Malik in the mix and let him learn from senior Indian bowlers.

“Central contract straightaway for him (Umran Malik). Don’t let him float around, keep him in the mix with the main players and let him learn by being around the Shamis and bumrahs and see the way they train, the way they manage their workload but don’t let him go astray,” Shastri told ESPNCricinfo as quoted by Hindustan Times.

Shastri also said Malik to focus on those three stumps without reducing pace.”Just tell him to do what he does best. Bowl fast… Also educate him on the lines you’ve got to bowl. Tell him to focus on those three stumps. You get that right first. After that, you can try and learn whatever other skills you want to add. And I promise you this guy is gonna be a handful in red-ball cricket. If you add this guy to Bumrah and Shami I think the Indian attack is going to be a serious one.”

“I think he’ll get better and better. Look at the lines he is bowling now. You don’t want him to cut down on pace. The last thing you’d want to tell him is while looking for control you cut down on pace. What you want him to do is get his lines right. If he can attack the stumps consistently varying his length, he will trouble anyone. And he can really rattle a new guy coming in because he’s got the pace, he can keep the batter on his toes but it’s that line if he can hit the right areas without reducing his pace, it’ll make a huge difference,” Shastri added.

Umran Malik has picked 21 wickets from 16 matches with strike rate off 13.43 in the ongoing cas rich league. In this edition of IPL he bowled fastest delivery 157km/h against DC batter Rovman Powel.

Sara Tendulkar was left heartbroken after Tim David’s run out during MI vs SRH match
He has a good cricketing brain, could be an all-format player for India : Gavaskar praises this youngster