“That’s why he has been picked” : Dravid on Dinesh Karthik’s role for SA series 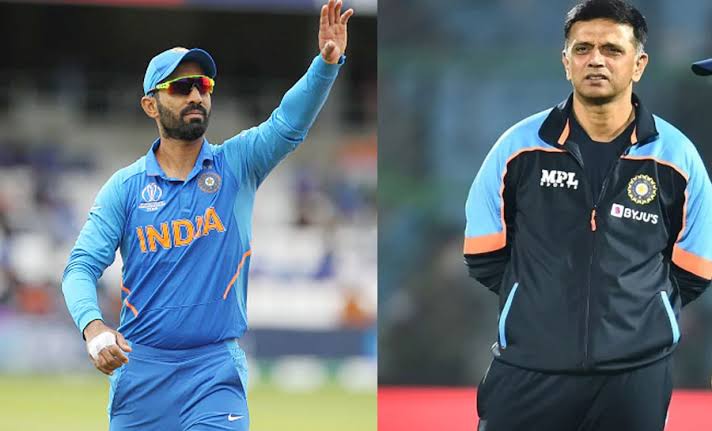 The veteran wicket keeper batsman Dinesh Karthik made comeback to the Indian Team after almost a gap of three years. His brilliant performance in IPL 2022 impressed Chetan Sharma led selection committee. He has been selected for the upcoming T20 series against South Africa in home soil.

Dinesh Karthik played a finisher role for RCB and scored 330 runs from 16 matches with an strike rate of 183. He played some unbelievable knocks which helped the franchise to reach playoffs of the IPL. After Mahendra Singh Dhoni’s retirement there is vacuum in finisher spot and Team India wanted to fill this spot before T20 World Cup.

Talking about Dinesh Karthik’s selection, Head Coach Rahul Dravid said “Dinesh… it’s pretty obvious… Very clear that he has made a comeback based on the skills that he has shown in a particular phase of the game. At that backend, Dinesh has really been able to show great consistency for the last 2-3 years. He has been able to make a difference in whichever team he has played, that’s why he has been picked,”

The five match T20 series will start from 9th June at Arun Jaitley stadium, Delhi. Other remaining matches will be played at Cuttack, Vizag, Rajkot, and Bengaluru. Most of the senior players are already rested for this series. KL Rahul will lead the side in absence of Rohit Sharma.

Ind vs SA T20 Series : Time Table, Teams , Venues and Streaming Details
“Ganguly would have been sacked from captaincy if…” : Harbhajan Singh