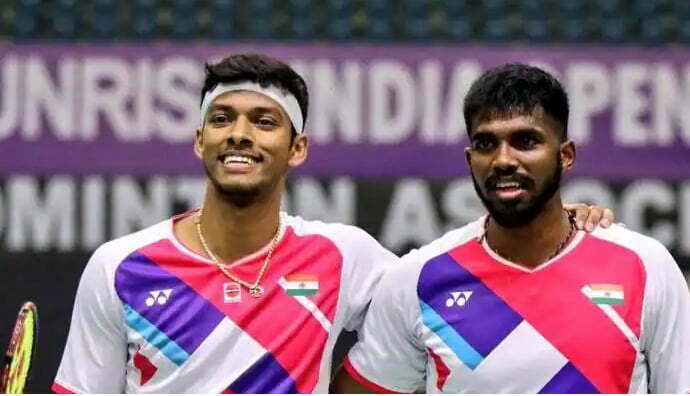 Star Indian men’s doubles pair of Satwiksairaj Reddy and Chirag Shetty assured themselves of a maiden medal at the World Championships after stunning world number 2 Takuro Hoki and Yugo Kobayashi of Japan in the quarterfinals here on Friday. The world number 7 Indian combination, which had claimed the Commonwealth Games gold medal earlier this month, dished out a gritty performance to outwit the local favourites and defending champions 24-22 15-21 21-14 in an hour and 15 minute to claim India first-ever men’s doubles medal at the prestigious tournament. It was India’s second World Championships medal in
doubles with Jwala Gutta and Ashwini Ponnappa claiming the first way back in 2011 in the women’s doubles. Earlier, MR Arjun and Dhruv Kapila’s fine run came to an end after the Indian pair lost to three-time gold medallists Mohammad Ahsan and Hendra Setiawan in their men’s doubles quarterfinals.
The unseeded Indian combination, who had some sensational wins this week, lost 8-21 14-21 to the third seeded Indonesian pair in less than 30 minutes, drawing curtains to its campaign.
The Indians had earlier defeated eighth seeds Kim Astrup and Anders Skaarup Rasmussen of Denmark in the second round.