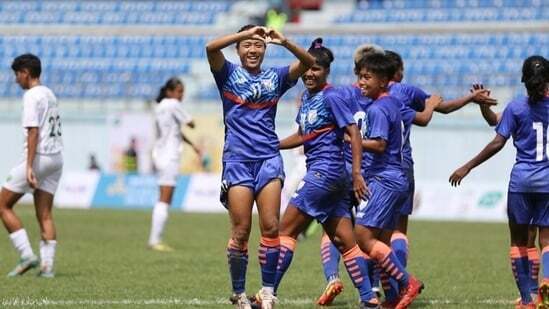 India begin their title defence with a comfortable 3-0 win over Pakistan in their first SAFF Women’s Championship 2022 Group A opener at the Dashrath Rangshala Stadium in Kathmandu, Nepal on Wednesday

Five-time SAFF Women’s Champion India had put themselves in the top right from the get-go. Pakistan, on the other hand, were quite defensive in its approach and relied on counterattacks.

Pakistan women’s football team skipper Maria Jamila Khan scored an own goal in the 21st minute to give India a 1-0 lead. Shortly after, Indian forward Dangmei Grace doubled India’s lead by scoring a goal in the 23rd minute. A late strike from Soumya Guguloth (94th minute) in the last minute of extra time increased India’s winning margin to 3-0.

Indian Women’s team head coach Suren Chettri and Dangmei Grace started off by reflecting on the importance of the first game and how crucial it was for them.

“First match was very important for us. It was a tricky game always. So, we’re happy that we won the game,” Suren Chettri said.

“This is our first match and it’s like the first match is always a tough game for everyone. All of us give our best and hope we give much better than this game in the coming matches,” Grace added

India’s next match is slated to take place against Maldives on Friday and then Bangladesh on 13th September. The top two teams from the group will qualify for the semi-finals.

NorthEast United FC sign goalkeeper ahead of the new season