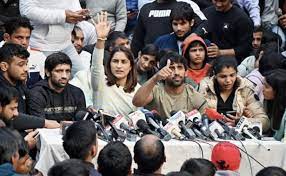 The sports ministry on Wednesday18th January’2023 took cognisance of the sexual assault allegations brought by top wrestlers of the country against the Wrestling Foundation of India and asked the wrestling body to reply in 72 hours to the charges. Otherwise, the ministry will proceed to initiate action against the federation in terms of the provisions of the National Sports Development Code, 2011, the statement issued by the ministry said.

Here are the top updates of WFI vs wrestlers

1. Vinesh Phogat alleged that Brij Bhushan Sharan Singh has been sexually exploiting women wrestlers for many years. Vinesh Phogat said she was not at the receiving end but she had received death threats from officials close to Brij Bhushan, she said.

2. At the Jantar Mantar protest, Vinesh Phogat said she knew at least 10-20 women wrestlers who were sexually exploited by the WFI chief and will only reveal their names if she gets to meet PM Modi.

3. Bajrang Punia threatened to not compete in any international competition unless Brij Bhushan is removed from his post. The federation is being run arbitrarily, Punia said.

4. Punia said there are videos of Brij Bhushan abusing wrestlers. “While we are denied help and support of foreign coaches, the president has hired a foreign coach for his own academy in Gonda,” he said.

5. Brij Bhushan, who is a BJP MP from Kaiserganj in Uttar Pradesh rejected all allegations against him and presented a different side.

6. “Why Vinesh did not talk to me or approached the police at that time? Why did she not meet the PM or the Sports Minister? Why is she saying this now,” Brij Bhushan said.

7,Brij Bhushan said Vinesh Phogat recently wanted the chief coach to be changed. “A coach can’t be kept on the recommendation of one player. We have to think about players from other states also. They should’ve come with names of coaches involved in sexual harassment earlier,” the WFI chief said.

8. Turning the case on to the Phogat sisters, the WFI chief said the wrestling body in Haryana was changed recently and an elected body came up. “Some people formed a local federation under Sports minister and wrestler Babita Phogat and they wanted their selected candidates to be chosen for national tournaments. Sports ministry rejected it,” Braj Bhushan said.

9. The controversy took a political turn as the Congress said this is the real character of the BJP. “Extremely shameful! Women players are being sexually exploited in the wrestling association. Female wrestler Vinesh Phogat has accused wrestling federation president and BJP MP Brij Bhushan Singh of sexual exploitation of players,” the Congress tweeted in Hindi.