IPL 2022 | “I am working really hard to be a part of the Indian Team”: Dinesh Karthik 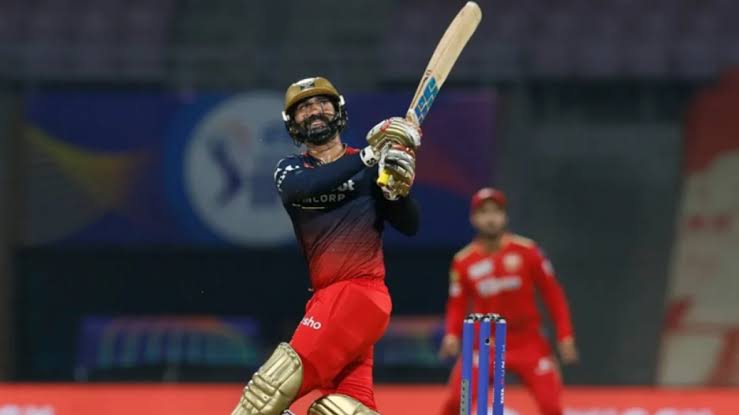 The Royal Challengers Bangalore won by 16 runs against Delhi Capitals at the Wankhede Stadium in the IPL 2022. This win made RCB move forward towards the third position in the Points Table. Dinesh Karthik with 66 runs off 34 balls holds star of the match for the RCB team gaining 189-5 in 20 overs.

After winning the match for Royal Challengers Bangalore, Indian wicket-keeper batter Dinesh Karthik revealed that he is preparing himself to be part of the Indian team again.

In the 15th edition of IPL 2022, Dinesh Karthik has scored a total of 197 runs with a strike rate of 209.57 and has never failed to show off his finest batting as a finisher.

In the post-match presentation ceremony player of the Match Karthik said “I must admit that I have a bigger goal. I have been working really hard. My aim is to do something special for the country. This is part of my journey. I have been trying everything to be a part of the Indian team”.

With his exceptional batting, Karthik has nearly replaced the place of the great in the RCB team.

“Depends on the bowler, whoever is bowling well. I respected Kuldeep as he was bowling well. When you are batting at the death, you try and get under the ball more while hitting”.

“Feels good to know that people associate calmness with me. Positions and calmness come from preparation. Shahbaz is a special player, he will do special things as a player. He is up for a challenge. He can hit the ball a long way,” Karthik said.

Dinesh Karthik has not played for the Indian team for a while now. But he last played well in the last T20 internationals. Karthik has now gained his chances of being picked for the upcoming T20 World Cup in Australia.

“To get 190 you needed special innings, and credit goes to the two boys Shahbaz and DK. We felt like we haven’t been as good as we would’ve liked at death bowling, so today we had a special plan”.

“It was pretty wet out there, and the start they had, many teams would fall away. But we stuck around. A good win.” “The way DK is playing at the moment, I may sound like a broken record, but he is playing the best he has ever. He is so clear, calm, and composed,” said du Plessis.

You may also like Du Plessis praises Dinesh Karthik