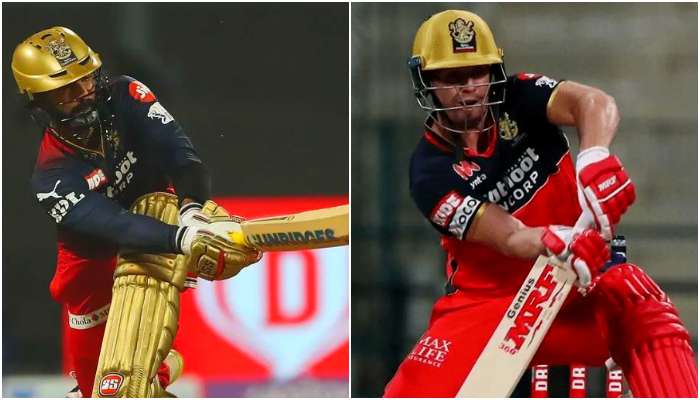 Former Kolkata Knight Riders (KKR) skipper Dinesh Karthik was acquired by Royal Challengers Bangalore (RCB) at the mega auction ahead of the 2022 edition of the Indian Premier League (IPL). Former South Africa star player AB de Villiers was the finisher for RCB over the years before he stepped out from all forms of cricket following IPL 2021. Karthik had shown his finishing capabilities in the last few years with KKR but was not consistent and his batting position was unsettled.

After his return to RCB, Karthik has been nothing short of sensational in the current season. The veteran wicketkeeper has scored a total of 210 runs with an astonishing strike rate of 205.88. He was unbeaten in six of the seven innings with an average of 210.00 and two Player of the Match awards.

Virat had told about Karthik that AB de Villiers would be proud to see him finishing games for RCB in IPL.

Speaking to VUSport Streaming ahead of RCB’s game against LSG, AB  de Villiers hails Dinesh Karthik as a ‘360 degree’ player. He also said that the RCB keeper makes him feel like he wanted to go back and play some cricket again.

“The form he is at this moment and he has already won RCB 2-3 games. He looks like he is in the form of his life. I don’t know where that comes from because he hasn’t played a lot of cricket. But man, he looks in good form and he plays around the wicket 360 degrees. He almost makes me feel like I want to go back and play some cricket again, watching him play. He gets me excited, plays under pressure in the middle order and he’s got a lot of experience and if he keeps his form up there is a good chance that RCB is going a long way up,” said de Villiers.

AB de Villiers admitted that he was shocked to see Karthik’s batting in this IPL, adding that he has had no cricket exposure in the last few months and was commentating in England before the second leg of IPL 2021.

“I was incredibly surprised and I didn’t expect it. I have always known that he is a very capable player, a nitty-gritty kind of a guy. He likes the high-pressure situations and he’s a busy player at the wicket. But he hasn’t played a lot of cricket. The last time I saw him before IPL he was commentating in the UK. He wasn’t playing a lot of domestic cricket and I thought he is possibly at the end of his career finishing. But he surprised us all I think with the intent and energy,” de Villiers added.

You may also like IPL 2022: “Dinesh Karthik can play finisher’s role for India in T20 World Cup”, Sunil Gavaskar

IPL 2022: “Dinesh Karthik can play finisher’s role for India in T20 World Cup”, Sunil Gavaskar
“there is something about this guy” Ricky Ponting Names an Indian Bowler Who impressed him at KKR Nets in IPL 2008