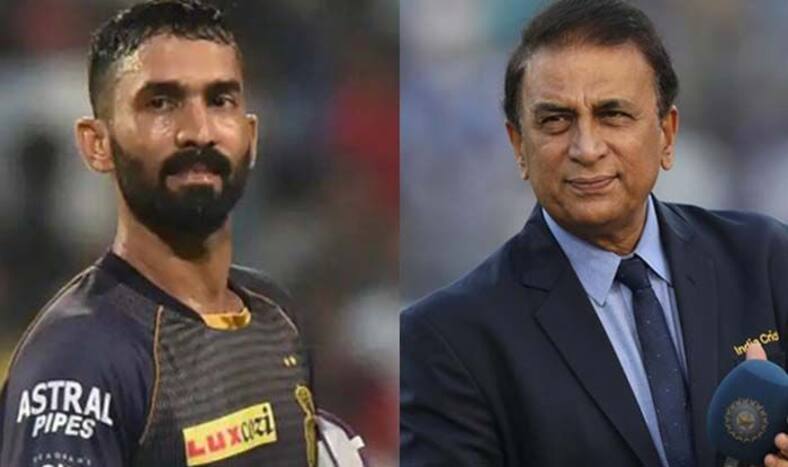 The Royal Challengers Bangalore won by 16 runs against Delhi Capitals at the Wankhede Stadium on April 16 in the IPL 2022. This win made RCB move forward towards the third position in the Points Table. Dinesh Karthik with 66 runs off 34 balls holds the star of the match for the RCB team.

Sunil Gavaskar was impressed with the way Dinesh Karthik is making his bat talk in this year’s IPL. The legend considers Karthik can play the role of a finisher for the Indian team in the upcoming T20 World Cup this year.

Former KKR skipper Karthik has been hitting the ball fluently for his new franchise Royal Challengers Bangalore this season.

Karthik has produced effective knocks of 32, 14, 44, 7, 34, and 66 with an amazing strike rate of 209.57. By remaining unbeaten in five of the six innings, he has an average of 197.00. After winning the match for RCB, Karthik revealed that he is preparing himself to be part of the Indian team again.

“He said he wants to be a part of the Indian Team for the T20 World Cup. So what I am saying is, don’t look at his age, just look at what he’s producing,” Gavaskar said at Star Sports.

“He’s just changing the complexion of the game with his performance. He’s doing it for his team. He’s doing the job that you can expect him to do at number 6 or 7 at the (T20) World Cup (in October-November),” Gavaskar added.

Karthik has played 26 Tests, 94 ODIs, and 32 T20Is. 2019 Men’s Cricket World Cup was the last international match he played while India lost in the semifinals.

See also  Win in Australia will go down as one of the greatest wins in Indian Cricket: Gavaskar

You may also like IPL 2022 | “I am working really hard to be a part of the Indian Team”:Dinesh Karthik