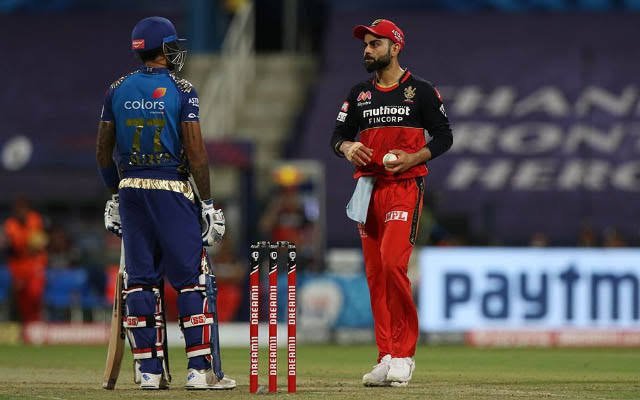 Indian batter Suryakumar Yadhav has revealed the whole story behind his long stare of Virat Kohli during a match between Mumbai Indians and Royal Challengers Bangalore in IPL 2020. It was the 48th match of the 13th season of the IPL 2020 on October 28, played in Abu Dhabi.

RCB batted first and scored 164/6 against MI. MI lost two wickets early in the match and Suryakumar’s batting made the game on track. It was during the run chase that Kohli tried to intimidate Surya’s composure by attempting to sledge the MI batsman and just gave him a stare without uttering a single word. MI batter SuryaKumar played a brilliant game with a score of 79 off 43 balls and took MI towards winning the match by five wickets.

He said “That’s his style. His energy level on the ground is always different. And that game was extremely important for both teams so Virat’s sledging was on another level in that match. I was focused on myself, like ‘boss, you cannot lose focus and have to win the match at any cost’. The ball went to him and he made that action from there and it was very instinctive”.

Suryakumar Yadhav dint responds to his intimidation and kept calm for Virat’s long stare while walking at him.

“I remember I was chewing gum and inside my heartbeat is racing knowing that he is walking at me. He isn’t saying anything, I wasn’t saying anything. I was saying to myself ‘no matter what happens, do not say a word. It’s a matter of 10 seconds. After this, a new over will begin. This won’t last long. So the situation passed. I then saw him right after the match,” mentioned Suryakumar.

Suryakumar Yadav was unbeaten on 79 off 43 balls with 3 sixes and 10 boundaries and MI won the match by 5 wickets. Suryakumar scored a total of 480 runs with four half-centuries in that season. Mumbai Indians won the title fifth time in the IPL 2020.

You may also like MI vs LSG: Everyone Is Trying Their Best To Win – Suryakumar Yadav