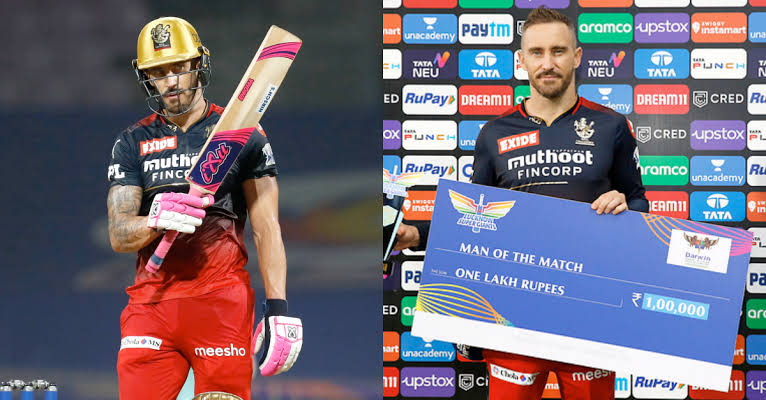 Royal Challengers Bangalore’s Captain Faf du Plessis predicted an IPL century around the corner. He played magnificent innigs against Lucknow Super Giants. Former South African batsman played 107 IPL matches scored 3185 runs but didn’t score a hundred. He started his IPL 2022 journey with a magnificent 88 runs but RCB lost the match against Punjab Kings. He has been fantastic with the bat this IPL.

Royal Challengers Bangalore didn’t win an IPL title. This year they are eagerly searching to win this tournament.Earlier in the match, batting first RCB scored 181 runs. Faf du Plessis demolished Lucknow Super Giants bowling attack. He missed his first IPL hundred by four runs. LSG didn’t mange to chase this and lost by 18 runs. After hitting a brilliant century against Mumbai Indians in the previous match, LSG skipper KL Rahul failed to score big. He was dismissed by Harshal Patel.

During the post match presentation, RCB captain said “Due to the nature of this ground, you do run a lot of twos and towards the end, it can be tiring. I got a few 96, and a 97, so hopefully (a century) is around the corner,” He said, someone to play the anchor role to keep the innings.

“We needed someone to stabilise the innings and then get going at the back end. Today, grateful that I could do it. Important that I am able to follow my blueprint of batting. If you bowled slow into the wicket to the big boundary, it never felt like you had enough power to clear that boundary. I was tired, but was still hoping that I could hit some at the end,”

Faf du Plessis praises Dinesh Karthik :
Du Plessis also praised Dinesh Karthik who has been unbeaten till now in IPL 2022. Karthik scored 210 runs with average 210 and strike rate almost 205. His performance helped RCB to move on 2nd place in the points table. Now he is looking for to be part of Indan National Team for the upcoming T20 World Cup.
“Need one guy to bat through consistently, but we haven’t had that frequently. DK has saved us quite a bit, hopefully today is a stepping stone in that direction, At the moment, it’s always a scramble (for playoffs). But that’s out of our control. We need to just work on our strengths and we actually can get better in a few things,” Faf said.

RCB captain satisfied with team’s bowling performance :
He is satisfied with the team’s bowling performance. They bowled as per plan specially last five overs.RCB bowler Harshal Patel played crucial role for the team. Now he has become a specialist bowler for death overs. “Harshal(Patel) has been exceptional, watch out for him, he’s going to be special for the rest of the season too,”