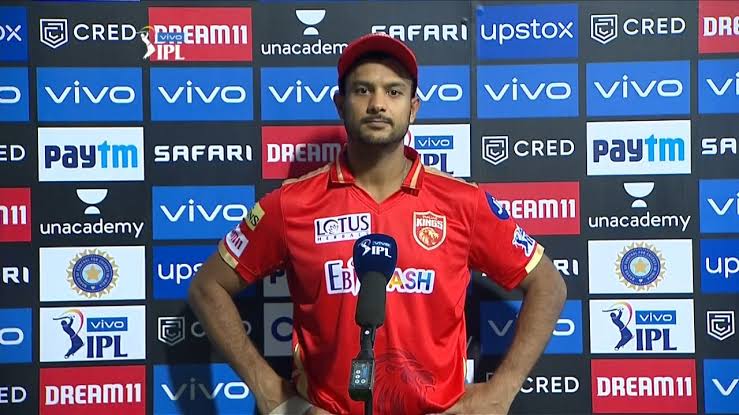 Punjab Super Kings skipper Mayank Agarwal expressed his disapointment after his team facing a huge defeat against Delhi Capitals on Thursday at Brabourne stadium. At the post match presentation Agarwal said he wants his team to forget it and move on.

Talking about the match, After winning the toss Delhi Capitals skipper Rishab Pant invited PBKS to bat first. Surprisingly Punjab Super Kings were bundle out for 115 in their respective 20 overs. This is the lowest team total in this IPL. Captain Mayank Agarwal again failed to score big. In reply,

DC openers thrashed PBKS bowlers out of the ground. They chased this total with fifty seven balls remaining and nine wickets in hand. DC bowlers played major role for the crunching defeat of PBKS.

Mayank wants his team to move on after defeat against DC

“It’s a tough one, a day to forget for us. Best to move on and not think too much into the game. We didn’t bat and bowl well, we just need to move on from today. We have been losing too many wickets too early, that’s a concern,” said after the match.

“We didn’t bat and bowl well, we just need to move on from today. We have been losing too many wickets too early, that’s a concern. Don’t want to dwell too much, if we do so, a lot of negatives will come out. A total of around 180 could have been competitive,” Agarwal added.

Delhi Capitals spinners impressive performance helped the team to grab the two points. Kuldeep Yadav and Axar Patel both spinner took two wickets of their four overs quota. Kuldeep was awarded Player Of The Match and got total 13 wickets so far in this IPL. In a heartfelt gesture he shared his award with teammate Axar Patel.

“To be very honest, through this IPL, I have got plenty of confidence this season and I am also mentally clear with my role. I just focus on my line and length and not on what the batter is going to do. When I err in length, I am not perturbed by it. If my length is good, then I can slip in the wrong ‘un and the flipper.” Said Kuldeep Yadav.