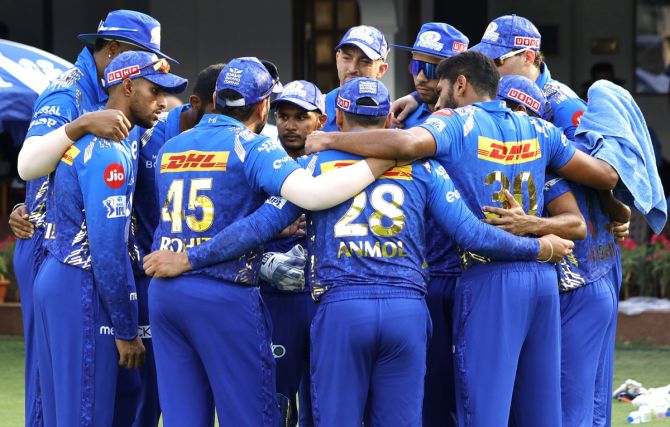 Mumbai Indians are the most successful team in the history of IPL. They have won the trophy 5 times in 2013, 2015, 2017, 2019, and 2020 under Rohit Sharma. Over these years MI skipper Rohit Sharma led his team winning with a miraculous play. In 2022 Mumbai Indians began their Indian Premier League campaign in its home city after almost three years. But this season of IPL 2022 is really a nightmare for Mumbai Indians. Even though they are slow starters in IPL over years, they could not register a single winning this year in IPL 2022.

At the beginning of the season, everyone had high expectations but things just fell apart. Mumbai Indians lost all the 8 matches played so far. This is a new IPL record as no team has lost 8 matches on the trot in the league. This is the first time since 2013, they dint win the trophy for two consecutive years. After losing the match against Lucknow Super Giants on April 24, they totally lost with points and the final chances for the playoff as well. Mumbai Indians have become the first team in IPL 2022 to be officially knocked out of the race to playoffs.

Mumbai Indians started their first match in IPL 2022 against Delhi capitals on March 27. Even though MI played well, they lost the match and DC won by 4 wickets and 10 balls.

After that MI had consecutive losses against Rajasthan Royals on April 2, Kolkatta Knight Riders on April 6, Royal Challengers Bangalore on April 9, Punjab Kings on April 13, and Lucknow Super Giants on April 16.

They lost all the matches 6 times in a row. MI was in a position to get the other 8 matches with at least 7 winnings to get into the playoff.

Next was on April 21, the most expected match between arch-rivals Chennai Super Kings and Mumbai Indians. The match between both went tough and thrilling. But at last, CSK won the match by 3 wickets on the last ball defeating MI. Then MI lost their 7th match losing the hope for the playoff.

A team needs a minimum of 14 points to progress to the playoffs. While 16 points would be good to move to the next round, 14 points can still be enough if the team’s Net Run Rate (NRR) is healthy. With seven more games to go, MI can get to 14 points but their NRR is not that good for consideration.

At last with minimum or no hope for a playoff, MI played against LSG on April 24. MI went down against LSG by 36 runs. Rohit Sharma’s, MI is officially out of the playoff in IPL 2022 after consecutive 8 losses.

Sachin Tendulkar asked me to sit beside him : Suryakumar Yadhav reveals an unknown story | IPL 2022
Ravi Shastri predicts either of these two players can win Orange Cap | IPL 2022