Mumbai Indians skipper Rohit Sharma blamed batters for horror batting performance including himself against LSG at Wankhede. At the post match presentation he said it was a good pitch but batsman played rashed shots. 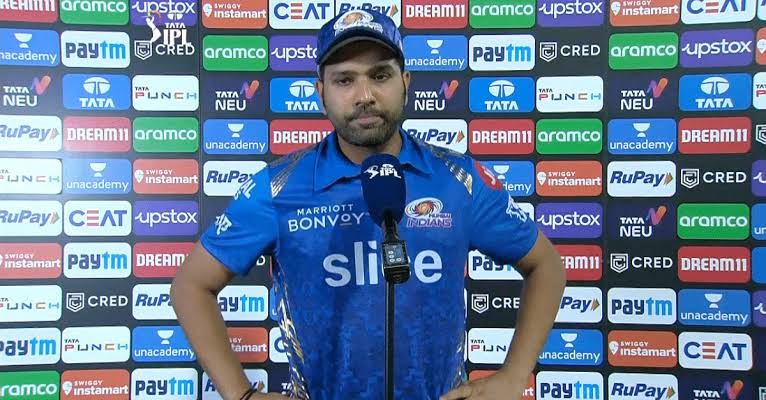 Five times IPL champion Mumbai Indians are now officially out of the race of playoffs in the IPL 2022. They again lost to LSG by 36 runs at Wankhede Stadium yesterday. Most successful team in the IPL lost their eighth consecutive match.

Talking about the match, Rohit Sharma won the toss and invited LSG to bat first. Again LSG captain KL Rahul showed his brilliant batting performance and slammed a century. With the help of this innings LSG scored a decent total of 168.

In reply, Mumbai Indians started well. But suddenly their batting collapsed and lost top four batters for 67 runs. Youngster Tilak Verma tried his best to win the match but he failed.

At the end of the match, MI captain Rohit Sharma blamed batters including himself for poor batting show. He said it was a good pitch but batsman played rashed shots.

“I thought we bowled pretty okay. It was a good pitch to bat on but we didn’t bat well enough. We should have chased that down. When you have a target like that, you need those partnership, which we couldn’t do. Some irresponsible shots including mine. They bowled well in the middle. We haven’t batted well in the tournament.”

Why Tim David isn’t included in the playing xi ?

Everyone has come into discussion given how our tournament has gone. We need to ensure that we have a settled team and give players in the middle a fair chance,” he said when asked if there is a chance for Tim David to come into the equation.
“Their roles are different when they play for their countries and here we expect something else from them. We tried not to make too many changes, and we have tried to play the best combination possible

But when you lose games, you always have such discussions. As far as I am concerned, I want to give people enough chances to prove themselves. The season hasn’t gone the way we would have wanted it to, but such things happen,” MI skipper said at the post match presentation