Watch: Quinton de Kock walks back to the pavilion after umpire turns down the appeal 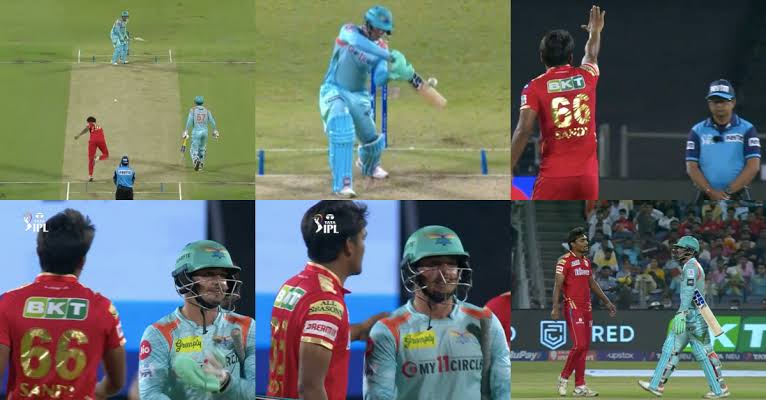 Cricket is a gentlemen’s game and it was proved again by LSG opener Quinton de Kock. Lucknow Super Giants wicket keeper Quinton de Kock wins the appraisals of the internet for his sportsmanship.

During 13th over of the match, PBKS bowler Sandeep Sharma bowled a slow ball and de Kock wanted to cut it through the backward point but ball touched the edge of his bat and went to the wicketkeeper’s gloves. On field didn’t give him out but surprisingly de Kock walked to the pavilion.He scored 46 runs off 37 balls, including 4 fours and 2 sixes.

The fans in social media were highly impressed on Quinton De Kock’s gesture.
Talking about the match, PBKS won the toss and elected to field first. They managed to restrict LSG to 153/8. But in reply PBKS couldn’t chase this total and lost the match by 20 runs.

“Bit of a surprise to be honest. We didn’t quite have the total we wanted to, but the guys bowled really well. We have got a lot to thank them for. They bowled really well, it’s great to have that sort of bowling line-up with us at the moment. Couple of bombs there by Mohsin at the end, it’s great to see, but it’s not his job to be doing it. It’s us, that’s our job. But to do it, didn’t really want to put that type of responsibility on him. Congrats to him, he had a great game. I am at ease, we play so much, just got to keep soldiering on. That’s just what I am focusing on at the moment. Just trying to take it game by game.” Quinton de Kock said at the post match presentation.