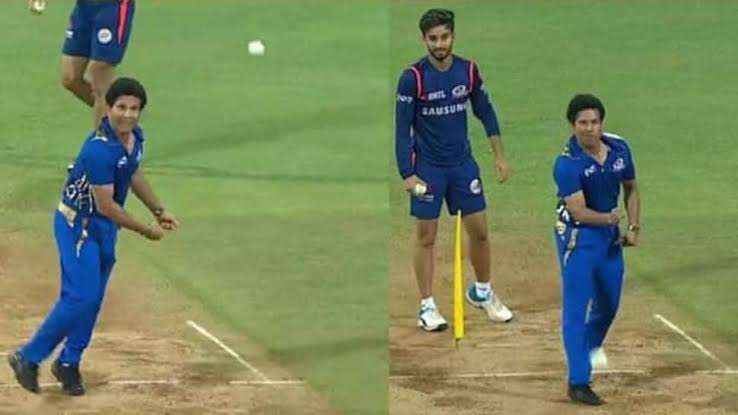 Sachin Ramesh Tendulkar is widely regarded as God Of Cricket. From highest run getter in International Cricket to scoring record 100 centuries, there are unbelievable batting records created by the batting maestro.

When he walked out to bat, ‘Sachin Sachin’ iconic chant reverberated in the stadium. Australia legend Mathew Hayden has compared him with ‘God’. He said “I have seen God , he bats at no 4 for India”

Master BIaster was also a handy bowler. He could bowl different types of deliveries like leg spin,off spin, googly, slow medium. He picked 201 wickets in his 22 years of splendid career. He saved 6 or less runs twice in 50th over. In ODI cricket, Sachin Tendulkar bowled a total of 1342 overs for India more than Shoaib Akhtar (1294) and Dale Steyn (1042 overs)

Little Master celebrated his 49th birthday few days ago on 24th April. He is the Mentor of Mumbai Indians. MI posted a video where Tendulkar was seen to bowl in the nets and hits the Stumps. It reminded them of Moin Khan’s dismissal by Sachin Tendulkar.

During India’s tour of Pakistan in 2004, Pakistan wicket keeper batsman Moin Khan was dismissed by Master’s magical googly on the last ball of the 3rd day test at Multan.

Sachin Tendulkar urges Mumbai Indians to stick together as a team :

“Mumbai Indians are going through tough times, in this, we should stick together and then move forward as a team. Despite the challenging season, the boys have worked as hard as they possibly could; we as MI have raised expectations very high. This is a new and young team, they may take time to settle down but you have to ride together through these phases. Stick together as a team and find a solution,” Sachin said to the broadcasters during MI vs CSK IPL match on 21st April.

IPL 2022: Sourav Ganguly – Virat Kohli and Rohit Sharma are great players and soon will get back in form
Watch: Quinton de Kock walks back to the pavilion after umpire turns down the appeal