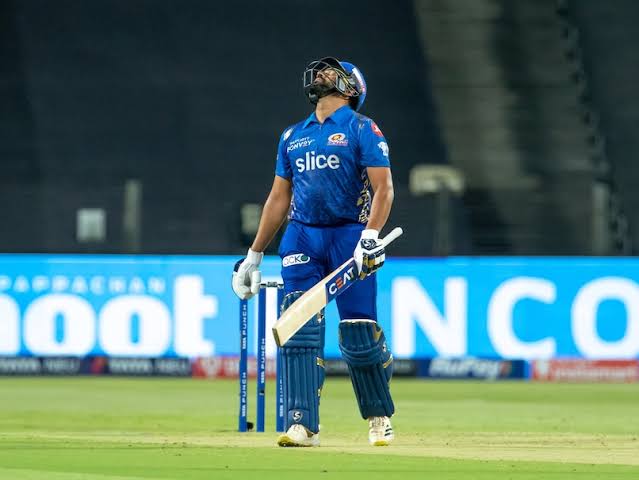 Mumbai Indians are the most successful team in the history of IPL. They have won the trophy 5 times in 2013,2015,2017,2019 and 2020 under Rohit Sharma. Over these years MI skipper Rohit Sharma led his team winning with a miraculous play. Mumbai Indians played their first Indian Premier League match on 24th April against LSG at Wankhede after almost three years. This season of IPL 2022 is really a nightmare for Mumbai Indians. Even though they are slow starters in IPL over years, they could not register a single winning this year IPL 2022.

At the beginning of the season, everyone had high expectations but things just fell apart.. This is a new IPL record as no team has lost 8 matches on the trot in the league. This is the first time since 2013, they dint win the trophy for two consecutive years. After losing the match against Lucknow Super Giants on April 24, MI had totally lost with points and the final chances for playoff. Mumbai Indians lost all the 8 matches played so far.

Ian Bishop said MI’s losing streak is due to the lack of strong bowling options and inconsistent batting. Bishop recommended few changes that can be made in MI, who now has to play for its satisfaction instead of playoff race. Ian Bishop considers that Tim David should have been brought in the middle order and Suryakumar Yadhav is playing well.

“When I spoke to Rohit after the last game, he seemed a broken man, understandably. It is a franchise with a great pedigree. I think they need some personnel changes,” Bishop said on Star Sports after the game between Lucknow Super Giants and Punjab Kings as they previewed the double-header on Saturday.
“Personally, I think they need Tim David. I don’t know why he hasn’t featured more often. They need someone in that batting lineup to get them to a more significant score to hold things, and maybe power up. Obviously, Suryakumar Yadav has been playing well.”

Their most expensive opener Ishan Kishan is yet to show his batting and skipper Rohit Sharma has also failed to give a better performance and haven’t scored a fifty. The bowlers like Daniel Sams and Tymal Mills are also not performing to their best. Now bowling attack is dependent on speedster Jasprit Bumrah.

“Their bowling has been leaking runs at critical times in matches, so it’s disappointing for them this year. But still, they got to see how they can get out of it, and how they can develop some of those players going forward,” Ian Bishop further added.

Mumbai Indians have failed to find the right combination this season and none if thier player has been able to show consistent performances in current season. Mumbai Indians will play against Rajasthan Royals in the Indian Premier League 2022 match on Saturday April 30, on MI skipper Rohit Sharma’s 35th Birthday.

Watch: Quinton de Kock walks back to the pavilion after umpire turns down the appeal
MS Dhoni returns back as captain of CSK – ‘Ravindra Jadeja relinquished’