Mumbai Indians left-arm bowler Kumar Kartikeya made an impact in the winning game against Rajasthan Royals. 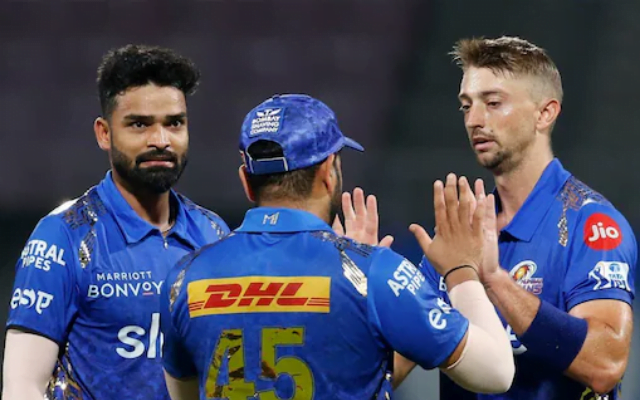 The five-time champions Mumbai Indians finally won their first match in IPL 2022 against Rajasthan Royals on Saturday, April 30. Kumar Kartikeya Singh was announced as the replacement for an injured Arshad Khan in the Mumbai Indians’ squad. The match against RR was his first debut in IPL 2022. IPL has given a wide range of opportunities for young players to show up their talent. Many players have performed well in the last 15 years of the IPL and have been selected for international tournaments.

Suryakumar Yadav and Tilak Varma played well and contributed the most to the winning game. Also, Kumar Kartikeya impressed everyone with his outstanding performance. The 24-year-old chinaman bowler took RR skipper Sanju Samson’s wicket in his first over. Samson was looking dangerous, hitting Hrithik Shokeen’s ball for two sixes. Totally Kartikeya was impressed with his performance as he gave only 19 runs from his 4 overs at a reasonable economy of 4.75.

Kumar Kartikeya during his debut IPL:

Kartikeya, during the innings break in the match, ascertained himself as a “mystery” bowler while in conversation with former India cricketer Murali Karthik. “I am a mystery bowler. I feel good. When I found out I was playing I was a little nervous. But I planned overnight for every batter. I was trying to bowl it on the pads to Samson. I got a lot of confidence when Sachin sir advised me”.

Kumar Kartikeya was from Sultanpur, Uttar Pradesh. He admitted that he was a little nervous before making his IPL debut. Speaking to Dainik Jagran, the MI spinner also revealed that he has not visited his home for over nine years.

See also  "The batters let us down today" : Rohit Sharma criticised the batters for the defeat against KKR

“I haven’t been home for 9 years. I’d decided to return home only when I achieve something in life. My mom and dad called me frequently, but I was committed. Now finally I’ll return home after the IPL” said Kartikeya.

“My coach Sanjay sir had suggested my name for Madhya Pradesh. In the first year, my name came up in the Under-23 team as a standby player, and I felt a huge sense of relief to see my name on the list,” he further added.

Mumbai while chasing the target of 159, lost both of their openers Rohit Sharma and Ishan Kishan at the start.  Suryakumar Yadav and Tilak Varma’s partnership scored 81 runs off 56 balls. Suryakumar was the highest run-scorer for MI with 51 runs from 39 balls, with 5 boundaries and 2 sixes. He gained the ‘Player of the Match’ award. At last, Tim David and Daniel Sams contributed with a good score reaching the target. MI recorded their first victory of the season IPL 2022.