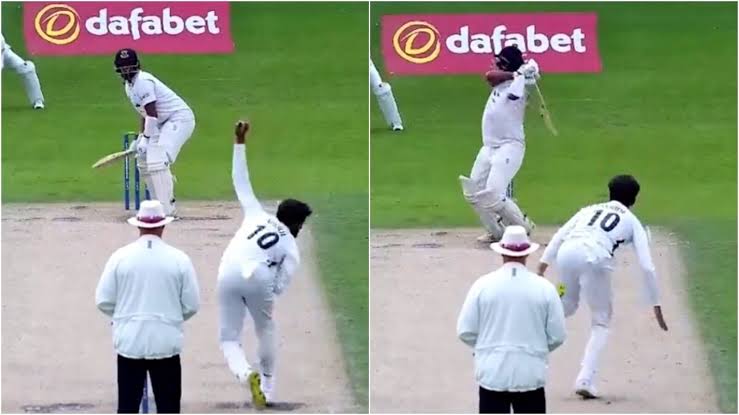 Indian batter Cheteshwar Pujara has continued brilliant batting performance in country championship. He smashed two double centuries and a century in three matches. Pujara is only second Indian after Mohammad Azharuddin to score double hundred in the county championship.

He was out of the Indian Team during two test match series against Sri Lanka because of his poor performances from last two years. His last century came against Australia in January 2019. He has scored only 124 runs against South Africa in the recent series with an average of 20.66. Once he was the back bone of Indian Test Team but now he is searching his form to enter into the Team again.

A match between Sussex and Middlesex, when Sussex was 6/2 in their 2nd innings Pakistan Pacer Shaheen Afridi bowled a bouncer way outside off stump but Pujara blown away with an upper cut to the stands. In this match Pujara hit a century. This is his fourth hundred plus scored in the ongoing tournament. At the end of the third day’s play, Pujara was unbeaten at 125 including 16 fours and 2 sixes.

Originally tweeted by LV= Insurance County Championship (@CountyChamp) on May 7, 2022.

Sussex Cricket shared another video clip of him on Twitter and the caption read, “Fourth match, fourth 100+ score. It’s a privilege to watch, @cheteshwar1.”

“I am excited and honoured to be a part of the historic Sussex County Cricket Club for the upcoming season. I do look forward to joining up with the Sussex family soon and be a part of its rich cricketing history. Over the years I have always enjoyed my time in the UK playing county cricket, so eagerly looking forward to the new stint and hope to contribute to the club’s success,” Cheteshwar Pujara said when he joined Sussex.