Watch : Virat Kohli bowed down to Dinesh Karthik after his splendid little cameo against SRH 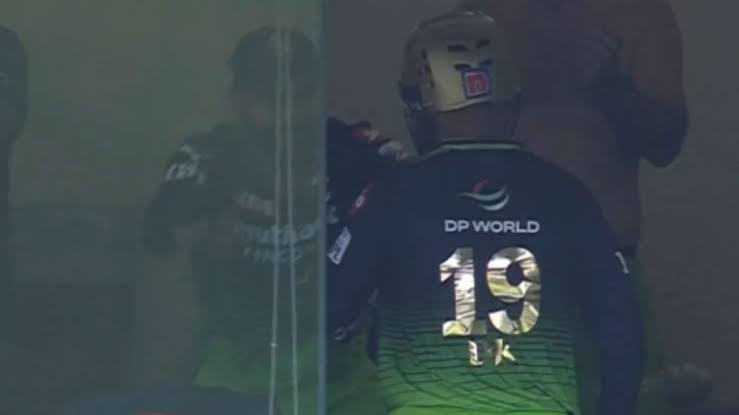 Dinesh Karthik has continued his dream form in the ongoing IPL. There is no stop for him. He is the main reason why RCB is dreaming to win their 1st IPL title. He has scored 274 from 12 matches with whooping strike rate of 200. His little quick-fire knocks at the end helped the franchise to reach big total or chase opposition’s team total. This year his impact on RCB changed the team completely.

Yesterday in a match at Wankhede Stadium, RCB captain opted to bat first but their key batsman Virat Kohli was dismissed on the very first delivery without scoring a run. Kohli scored total 3 ducks in IPL 2022. After that Faf du Plessis and Rajat Patider stitched over hundred runs partnership. At the end of the innings Dinesh Karthik has showed blistering little cameo 30 off 8 deliveries including 1 four and 4 sixes and helped team to reach a fighting total of 192 in 20 overs.

When Dinesh Karthik went back to the dressing room after innings end , former RCB captain Virat Kohli bowed down to Dinesh Karthik for his majestic performance. Virat’s gesture win the hearts of social media.

“If he (Dinesh Karthik) is hitting sixes like that, we want to get him in and bat as long as possible. He’s just so clear. To be honest, I was actually trying to get out because I was so tired, to get DK in. We were even contemplating – myself ‘retiring out’. And then, we lost that wicket.

“DK is in such good form. It was a tricky wicket. A lot of guys, their first few balls, they struggled. Lucky for us, there was a drop catch of DK and he just took them apart,” Du Plessis said after the match. Meanwhile, Royal Challengers Bangalore won the match by 67 runs.