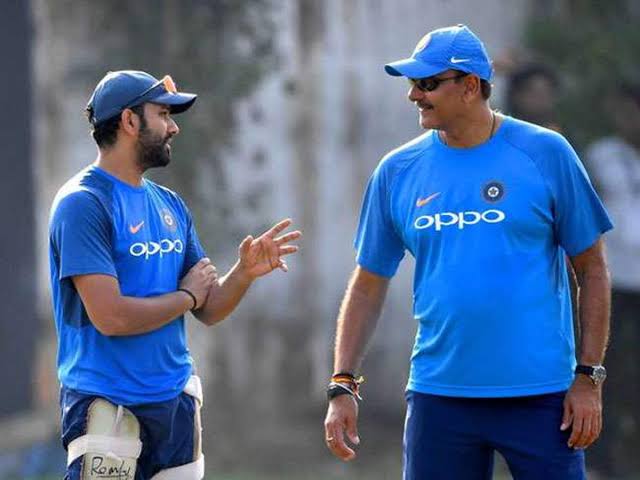 Mumbai Indians skipper Rohit Sharma had been worried about his form for the first nine games of MI played in IPL 2022. The hitman came out with a good knock in MI’s 10th game against Gujarat Titans.  Former Indian head coach, Ravi Shastri, has shared a message expecting the MI skipper to ‘start converting good scores into big scores in typical Rohit’s fashion’ ahead of Mumbai Indians’ next game against  Kolkata Knight Riders in the ongoing edition of the Indian Premier League (IPL) on Monday.

Rohit Sharma is one of the finest batters of the white-ball format. Captain Rohit has also failed to take shape of his natural hitting for Mumbai Indians in the 15th season of the IPL compared with last season. Rohit played with positive intent against the Gujarat Titans and scored 43 runs in just 28 balls with 5 fours and 2 sixes. Apart from that game, he also had a good start in a few previous games but couldn’t convert it to big scores. Ravi Shastri feels Rohit’s run express cannot be stopped once it starts.

“Absolutely. What I liked about Rohit in the last game was that his attitude and intent were brilliant from the start. It feels like he’s making 30s, 35s, and 40s, now it’s time to convert [the starts],” Shastri told in a conversation with ESPNcricinfo.

Five-time champion Mumbai Indians have struggled a lot in the current season of IPL. Rohit Sharma’s form was not as good at the starting and led MI to win only 2 out of 10 games and positioning themselves in the last place (10th) in the points table. MI is now out of the playoff race and they play for their pride they will try to finish off this season in a better way.

“Mumbai Indians don’t have anything to play for in this tournament except pride. When a team has won the title five teams, they know that one or two such seasons can also come where nothing has worked for them. Rohit Sharma wasn’t in good form.”

“The top-order didn’t score as many runs as it should have. They’ll want to finish with a bang. [They should think] “We didn’t win or qualify but let’s play the last three to four games with heart and positivity, and win comfortably,” Shastri further added.

You may also like IPL2022 | Rohit Sharma seemed a broken man : Ian Bishop said ahead of MI vs RR match