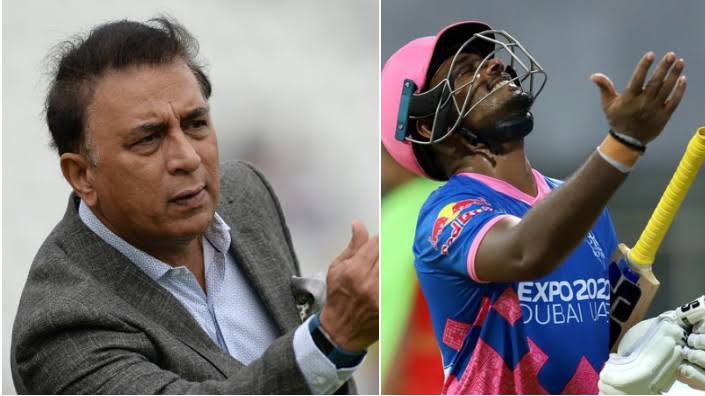 Former legendary cricketer Sunil Gavaskar slammed RR skipper Sanju Samson over his batting position. Meanwhile, he batted at no 5 against Delhi Capitals yesterday whereas Ashwin (at no 3) and Devdutt Padikkal came before him. Samson went to bat in 15th over of the innings and was dismissed by DC bowler Anrich Nortje on 6.

Gavaskar was not impressed with Samson and urged him to take responsibility.”He can be (a good hitter of the ball), but he didn’t help himself by coming to the bat down the order. If you’re no.4, you come into bat at no.4 or 3. Take the responsibility. Now, look what happened,” Gavaskar said during commentary after Samson was dismissed by Anrich Nortje.
“He suddenly found that because they hadn’t got the start they wanted, he got to start playing the shots from the word go. And in that attempt, he perished,” the former Indian skipper further added.

I hope we came back stronger : Sanju Samson

“Very disappointing night. We were few runs short, and few wickets short in the middle. While we were batting the wicket was two paced. We were 15-20 runs short. While bowling second we dropped a few catches. Really disappointed, but we would like to come back in the next game. I never thought it (Marsh’s lbw) could have been pad, we thought it came off the bat. We need to come back stronger after losing any game in IPL, and I hope we come back stronger. We have done that in the past. Hetmyer will be back soon.” RR captain Sanju Samson said at Post Match Presentation.

Suryakumar Yadhav likely to miss T20 series vs SA after being ruled out of IPL 2022 : Reports
IPL 2022: Ravindra Jadeja ruled out from CSK squad with rumours stirred up – CEO Kasi Viswanathan reacts