Michael Vaughan expects du Plessis to advise Kohli to enjoy his match forgetting all his past records which could help him score big runs. 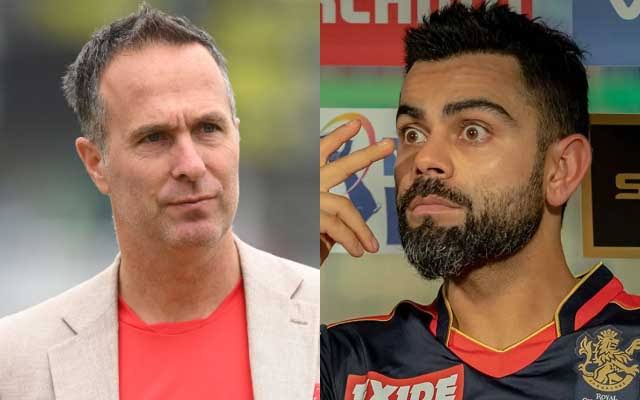 Royal Challengers Bangalore’s biggest worry in the current IPL 2022 has been the poor form of Virat Kohli and suffering to score big runs. Kohli has managed to score only one fifty and followed by a thirty overcoming the lean patch. But he lost his form again and got a golden duck and most notably three golden ducks in this season. This is the first time in his cricketing career; that he got three ducks in a single series. King Kohli scored two ducks against SRH on match number 36 and the latest was the 54th match on 8 May. The other was on the 31st match against LSG. And ahead of RCB’s game against Punjab Kings at the Brabourne Stadium on Friday, May 13, former England captain Michael Vaughan has a few words for RCB skipper Faf du Plessis to advise Virat about his form.

Speaking to Cricbuzz, Michael Vaughan expects RCB captain Faf du Plessis to tell Virat Kohli to enjoy his match forgetting all his past records. Vaughan also says that Kohli could score big runs. If he gets 35 runs overcoming those struggling runs of 10 and below, showing a bit of youthfulness.

“I hope Faf du Plessis has spoken to him and told him – ‘Go back 10 years when you didn’t have this profile. You’re not married and don’t have a kid. You’re going out there to whack the ball and have some fun. Forget your age, forget what you have done,” he said.

“If he gets to 35, I reckon he can go big. It’s just those initial 0-10 that he’s been struggling with. If he can get away and show a little bit of that youthfulness, he’s going to be dangerous.”

Former South African captain Shaun Pollock feels that it’s enough if Kohli contributes around 35 runs from 20 balls. That will do a good job for the team RCB in the IPL. He also points out to take the pressure off him expecting a big score.

“From the Virat perspective, you’ve almost got to say to him – ‘you don’t have to go and win the game for us’. Just a certain contribution. It’s quite difficult to talk about. If he gets you 35 off 20 balls, in many ways that’s done the job because of the way they have played this season. They have become reliant on the other guys. He doesn’t have to get a 100. Just take a bit of pressure off him,” he said.

Kohli has registered only one fifty in IPL 2022 so far. He scored 58 off 53 balls against the Gujarat Titans on April 30 unfortunately RCB lost the match.
Kohli has totally scored 216 runs from 12 matches with an average of 19.64 and a strike rate of 111.34.

Also, read | Watch| IPL 2022: “I smiled because I felt like I have seen everything now” – Virat Kohli on his golden ducks