Watch| IPL 2022: “I smiled because I felt like I have seen everything now” – Virat Kohli on his golden ducks

Star batter Virat Kohli opens about his three golden ducks in this current IPL and how he avoids the critics about his form. 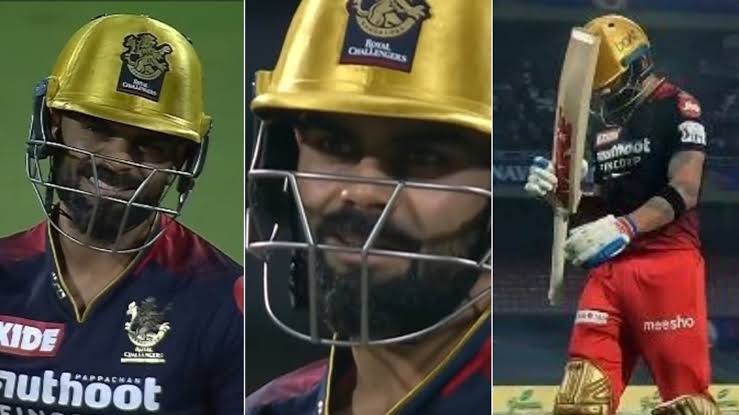 Former Indian and RCB captain Virat Kohli is suffering to score big runs in this current IPL season due to his poor form. Kohli has managed to score only one fifty and followed by a thirty overcoming the lean patch. But he lost his form again and got a golden duck with most notably three golden ducks in this season. This is the first time in his cricketing career; that he got three ducks in a single series. King Kohli scored two ducks against SRH on match number 36 and the latest was the 54th match on 8 May. The other was on the 31st match against LSG. After getting dismissed for a second duck, Kohli walked off with a smile on his face.

Talking about the same in a light conversation with Danish Sait on the RCB Insider show,

Kohli said that he smiled after the second duck because it was new and hadn’t happened to him. And he says he had seen everything in this season.

Virat Kohli – Reply about his form:

“First-ball ducks. After the second one (duck), I actually realized what It feels like to be like you (Mr Nags character), absolutely helpless. It hasn’t happened to me ever in my career, I think. That’s why I smiled because I felt like I have seen everything now. It’s been so long, I have seen everything this game has to show,” Kohli said.

Furthermore, Kohli said that he won’t pay attention to the critics from experts and others about his form. He mutes his television to avoid the people’s opinion.

“They can’t be in my shoes and can’t feel what I feel. They can’t live my life. And They can’t live those moments. How do you cut out the noise? You either mute the TV or don’t pay attention to what people are saying. I do both those things,” Virat Kohli added.

During the interview, Virat Kohli was asked how much he misses AB de Villiers on the team. As AB de Villiers is now retired, both the cricketers are good friends in and out of the field. Kohli said that he still watches RCB matches. “I miss him a lot. I speak to him regularly, quite regularly. He keeps messaging me. He was in the US recently watching golf. Augusta Masters is what I heard it was called. So he told me he was there experiencing it with his friends and family. So we stay in touch and he’s very keenly watching RCB and hopefully here next year in some capacity” Kohli added

In spite of Kohli’s form, RCB has won 7 out of 12 matches positing themselves in 4th place in the points table. Their playoff chances are high as they have to win one out of two matches. RCB will next play against Punjab Kings on May 13 at Brabourne Stadium, Mumbai.

See also  IPL 2022: Sunil Gavaskar on Venkatesh Iyer - “He may be suffering from the second-season syndrome”

Ravi Shastri Tells This Indian Star Batter: Bat In The “Russel Mode”
“The batters let us down today” : Rohit Sharma criticised the batters for the defeat against KKR