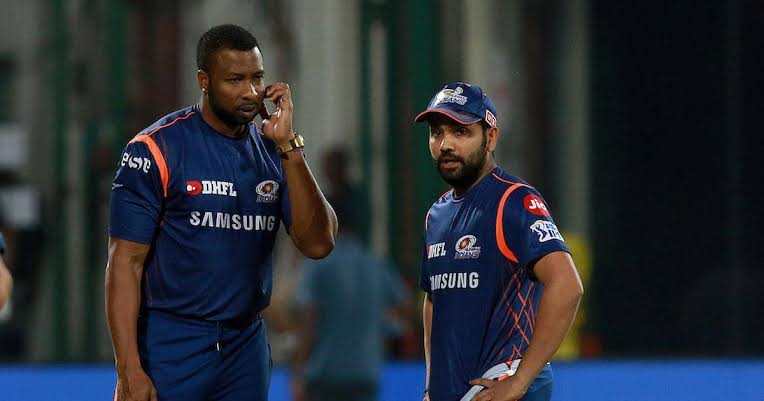 El Clasico match of IPL, between two rivalry Mumbai Indians and Chennai Super Kings, was played at Wankhede Stadium yesterday. Mumbai Indians won the match by five wickets to eliminate CSK out of playoffs. While MI already knocked out from playoffs, gave chance to their youngsters in this match. Surprisingly ‘Big Man’ Kireon Pollard was dropped from playing XI on his birthday. But MI skipper Rohit Sharma revealed the reason during toss time.

Pollard was Ready for it : Rohit Sharma

“Keeping an eye on the future, Pollard is out and Stubbs is in. Shokeen comes in for Ashwin. He (Pollard) was the one who came up to us and he was ready for it. We want to try “ Rohit Sharma said to Star Sports. Pollard was replaced by South African Tristan Stubbs but he didn’t open his account on his maiden IPL match.

However, Kireon Pollard has struggled with his form in the ongoing IPL tournament. West Indian all-rounder has scored 144 runs from 11 matches at an average of 14.40. Few days ago MI coach said “Kieron Pollard has been honest as well, expressing himself that he hasn’t been able to finish games. “
He has been part of Mumbai Indians since 2010. His finishing ability specially on last five overs helped the franchise to win five IPL trophies.

Kireon Pollard has been a great team man : Zaheer Khan

“Pollard has been one of the main contributors to the success of this franchise over the years, he’s been part of the processes through and through. Like I mentioned, it is the last leg of the tournament, so that’s why a few new faces and as an individual and as a member of the core group, he (Pollard) was on board, it wasn’t easy on him but he made it easy for us. He has been a great team man and even today it was nice to see his contributions from the sidelines.” Said Zaheer Khan after end of the match.

Talking about the match , MI captain won the toss and invited CSK to bat first. But their top order was collapsed in front of the fiery spell of Daniel Sams. They lost five wickets on 29 and didn’t cross three figure mark as they were all out on 97. Skipper MS Dhoni scored highest for the team of 36 from 33 deliveries and remained unbeaten.

In reply, MI also lost their four wickets on 33 but Tilak Verma (34*) and Hrithik Shokeen (18) stitched a solid partnership for the team. MI won the match with 31 balls remaining. It’s their 3rd win in IPL 2022 and still placed at the bottom of the table.

MI pacer Daniel Sams won Player Of The Match award. During post match presentation he said “The first few games didn’t go to plan. Had a little bit of time to reflect on those performances. I just figured out that I was focusing on the batter too much and not on my strengths. That was something to work on at training.”

IPL 2022: “He is going to be an all-format player for India” – Rohit Sharma gives a big statement on this youngster
IPL 2022: MI vs CSK| DRS was unavailable even though with the presence of a generator – Harsha Bhogle explains